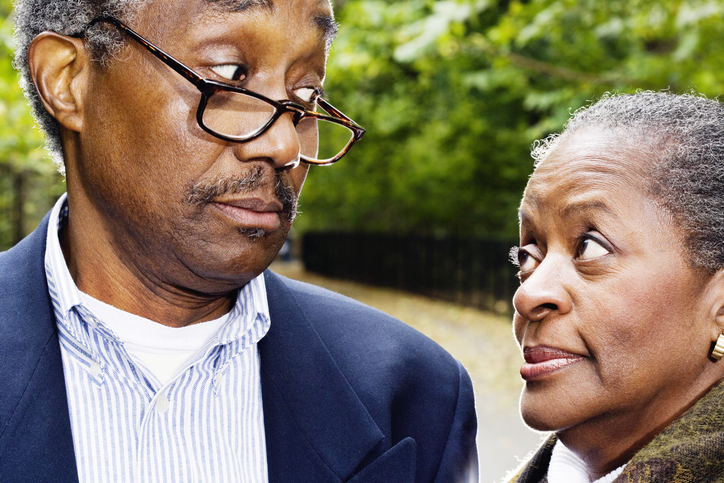 Close up of senior African couple looking at each other outdoors

In retirement, couples have to cope with a more intrusive co-existence. How well you handle it can depend on your perspective.

Negotiating toward a peaceful coexistence.

Retirement in these times of longer living is more complicated than just ending a career. It’s actually the end of one long life stage and the beginning of another — one that can span, if we’re lucky, more than 20 years.

As with entry into any new life stage, the transition can require quite a bit of adjusting. For marriages, it can be good or bad, depending on circumstances and your perspective.

In retirement, couples have to come to terms with a much more intrusive co-existence. For some, that’s not much of a problem. Partners actually enjoy their time together and have opportunities to become closer. But that’s not true for all couples, nor is it true for any couple all of the time.  When two people spend day in and day out in close proximity, they will bump into each other. And if the marriage is not on a sound footing, retirement might lead to a further deterioration just by virtue of the added time together. Many who don’t want to retire point to the quality of their marriage as to why they like to stay out of the house.

Still, a good marriage can make the transition easier, especially for a man. The truth is men can have a hard time adjusting. Women have it easier because they tend to hold a variety of roles even if they’re working (mother, caretaker, etc.), and are more socially connected with the world outside of work. Men tend to define themselves singularly, usually by their occupation, so leaving their jobs can feel more traumatic.

Wives might also have adjustment issues, but these are often a result of their husband’s retirement, particularly women who aren’t in the workforce. While things are likely to start off well enough, that honeymoon can end quickly.

One problem can stem from over-dependency. Being socially connected is essential for mental health, and we found that happily retired couples have active social lives with lots of friends. Women seem to grasp this – as we said, they’re more socially integrated and have stronger emotional ties to friends and family. Many men, in contrast, rely on their wives to keep them active and socially involved.

A certain amount of dependency is reasonable, but some husbands might take it to the extreme. They might expect to be the primary focus of their wives’ attention when newly retired. And many wives might become angry and resentful if they have to surrender more of their personal time than they’d like to.

Other problems can emerge if there are out-of-sync expectations. Husbands and wives might have very different notions about how they want to live, individually and as a couple. A wife might presume more help with household chores, or either spouse may anticipate more involvement from the other in their preferred leisure activities. Disappointments can lead to hostility if either partner feels they’re not getting fair consideration of their needs.

Incompatibility can be another. Some partners might find they don’t have as much in common as they once thought. Underlying differences can be masked when they’re focused on work and raising a family. One retiree summed it up this way: “My wife loves the big house in the suburbs while I want a smaller place, preferably an apartment in the city. My ideal retirement has European travel as its centerpiece; hers, I suspect, is centered on grandchildren and home improvement projects. I’m just not interested in our house becoming my lifelong mission or a day care center.”

Despite all this gloom and doom, many couples eventually get better at retirement. Husbands become less demanding of their wives’ time, and will either develop their own interests or learn to respect their wives’ independence. And there’s also likely to be a lot of compromise along the way, with both expecting less and giving more than either initially planned.

Lots of happily married couples run into these obstacles. If it happens to you, it’s not a reflection on you, and your marriage isn’t necessarily falling apart. That said, one way to avoid some of these pitfalls is to talk to each other about your expectations and establish the rules for a more intrusive co-existence. That way you can eliminate ambiguity.  These discussions should take place well before retirement so you have time to negotiate solutions.

Along with talking, it’s healthy for husbands and wives to pursue their own interests and have some separate friendships. Personal goals and friendships provide opportunities for growth and help you maintain your own identity. Besides, the time you spend apart gives you something to talk about when you’re together.