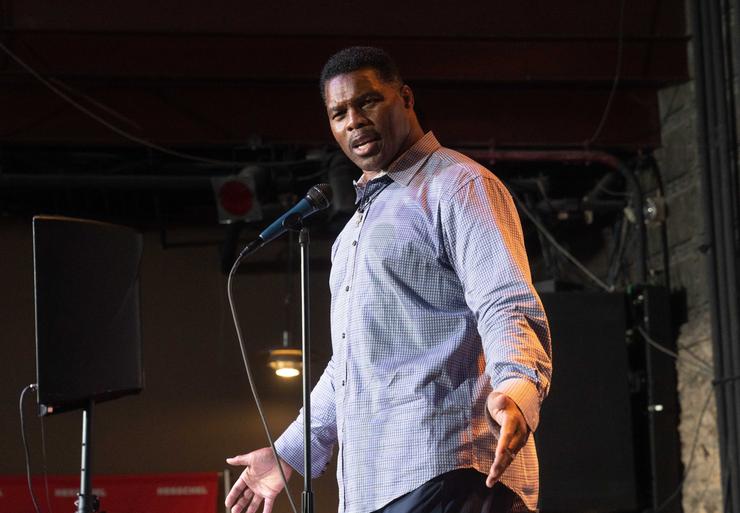 Taking lying to an art form.

You have to wonder if 19th century German chancellor Otto von Bismarck ever reached across the centuries and met Herschel Walker, the 1982 Heisman Trophy winner and current Republican Senatorial candidate from Georgia.

Bismarck is credited with a library of quotes that might’ve come out of Ben Franklin’s Poor Richard’s Almanac. And that includes “People never lie so much as after a hunt, during a war, or before an election.”  The problem with Walker’s lies is the line of truth that’s blurred in his mumbled reasoning.

Walker talked recently with Rollingout Magazine’s Christal Jordan. The three-part video was called an exclusive conversation with black media. Three minutes into the posted chat came a mention that pierced the cloud.

However, according to Associated Press, he was associated with a for-profit entity, Patriot Support, that’s been investigated for preying on military veterans and defrauding the government of millions. The Department of Justice and nearly two dozen states are locked in a huge civil case that says Patriot Support billed the government for veteran care that wasn’t needed.

Walker has said he founded the company, but he was actually hired as a celebrity spokesperson in 2008 more than a decade after Patriot Support was founded. AP said he was paid $331,000 in 2021. He has since left the company.

In fairness, people who’ve heard Walker speak to the military and veterans have been impressed with his testimonies about overcoming self-image and mental health issues. An argument could be made, however, that mental wellness talks could fit easily into Walker’s own family.

A few days ago The Daily Beast said Walker urged a woman to get an abortion after he got her pregnant in 2009. Walker denied the story on Twitter.

“This is a flat-out lie — and I deny this in the strongest possible terms.”  He said he plans to sue The Daily Beast over the report. Word of the news, though, brought several Twitter tirades from Walker’s son Christian.

“Every family member of Herschel Walker asked him not to run for office… He decided to give us the middle finger and air out all of his dirty laundry in public, while simultaneously lying about it. I’m done.” More written and video Tweets followed, though, even after Christian said he was done.

Obviously, you can’t believe everything you read on Twitter. Other posts from Christian Walker have indicated a troubled time in his life. Maybe, some of Walker’s time spent talking to the military about mental wellness should have been spent at home.

Ultimately, this may be the issue. The election is November 8th. We shouldn’t be surprised that slings and arrows from both sides of the aisle are appearing after the calendar rolled through October. In the newsroom, we were warned to be aware of The October Surprise in any political campaign.

Still, you wonder if Otto von Bismarck ever met today’s politicians especially Herschel Walker. In the middle 1800s in Germany Bismarck offered: “there is providence that protects idiots, drunkards, children, and the United States of America.”

Without question Walker is not an idiot and he’s most likely not a drunkard. But he has children in the United States of America. So, during the next couple weeks, Walker may need providential protection to get out of the social and political corners where he’s been surrounded by very wet paint.