Sex as power is not a new concept, but to Romans it was a guiding principal in their culture.

To put it mildly, the ancient Romans had an open mind when it came to sex. They approached it guilt-free and regarded it as a gift from the gods to be enjoyed by mortals.  In practice, they were extremely liberal, and by liberal I mean that almost anything was acceptable. Some of what was considered normal in those days is regarded as perverse, even criminal, by today’s standards.

Now, when we say anything goes, we’re talking about Roman men. That’s not how it was for women. They were expected to marry as virgins and remain faithful to their husbands throughout. If an upper-class woman was caught in adultery, punishment was mandatory — she was exiled from her home and excluded from burial in the family tomb. A husband who did not report the crime was held culpable as a pimp. The punishment for the wife’s lover was, by law, forced sodomy by the offended husband. And it didn’t have to be with a penis — there is one case where a husband carried out the act with a fish.

For men, sex was a way to express their vir, their manhood and sexual prowess, and so it was something to be pursued aggressively. Sex with slaves, former slaves, or prostitutes of either sex was taken as part of a man’s normal life, and did not figure in any moral equation.

Still, it wasn’t completely unregulated fun and games. Men were expected to follow certain standards of sexual behavior, and these reflected how Romans viewed their society as a whole. A key value in the Roman social structure was power. Individuals strived for “auctoritas”, best defined as authority or influence. Auctoritas was a zero sum game, meaning that if your auctoritas increased, somebody else’s decreased. Sex was an embodiment of that Roman ideal — an ownership and a display of power.

So, thinking in terms of power, the Romans viewed sex  penetration as active, and being penetrated as passive. Active was associated with the masculine role and with impenetrability, while passivity was defined as  penetrability and considered to be feminine. Pleasure was the sole dominion of the man, or whoever was doing the penetrating. 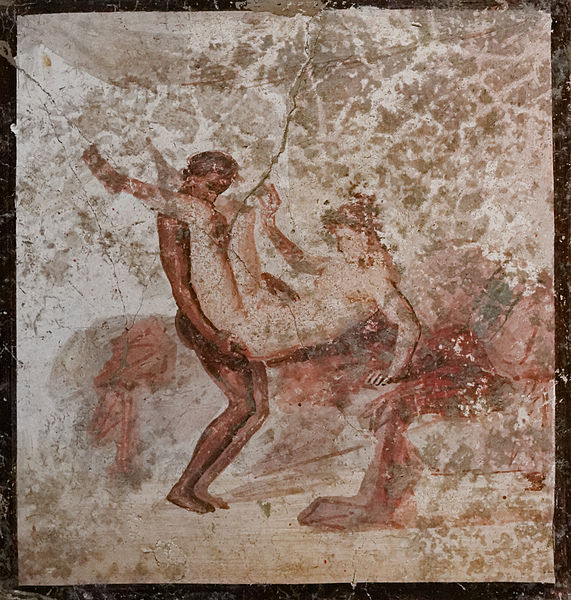 Our designations of heterosexuality and homosexuality did not apply to Rome — there are no words in Latin that can be used to describe a person as homosexual or heterosexual. There was little or no shame, under the right circumstances, to go one way or the other, or both. Sex with young boys was perfectly acceptable, and in fact, you might seem a bit odd if as a grown man you did not engage. Julius Caesar, for example, was very proud of all his sexual conquests, girls  and boys, and was rumored to have had an affair with Nicomedes IV of Bithynia, earning him the nickname “The Queen of Bithynia”; as a tribute to his sexual prowess and lack of discrimination, his soldiers described him as “a husband to every women, and a wife to every man.”

So, a freeborn Roman man can have sex with both female and male partners as long as he took the dominating role. A homosexual act was fine as long as there was no perceived loss of masculinity. However, a man who took the receiving role in sex acts were disparaged as weak and effeminate. A man who liked to be penetrated was called “pathic”, roughly translated as “bottom”, and was looked down upon by other men. The loss of standing was so well understood that to be the subject of sexual assault that included penetration was considered to be the most humiliating punishment for an adult male citizen.

The Romans actually had a law to supervise this aspect of sexual behavior and thereby maintain the masculinity of their citizens. Lex Scantinia did not define homosexuality as a crime, but rather tried to enforce that men take the active, or penetrating, role in sex. A male citizen of high standing could be penalized for taking on a submissive role because such an act threatened the fabric of masculinity for the society as a whole and brought down shame on his family.

With it’s link to power, it’s not surprising that sex was weaponized. It could be used to demonstrate dominance, aggression, and superior strength. The threat of penetration could also be used as punishment, even from the gods. Priapus was designated as the protector of gardens, as well as provider of good luck, and was abnormally well-endowed. In a song of the time, there is a verse which serves as a warning to those who stole crops, which essentially describes how this god will ravage you with his missile, adding unique meaning to the phrase on the value of carrying a big stick. 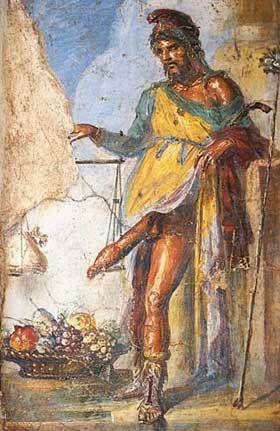