A great idea, but not without its difficulties.

Many people find the prospect of early retirement appealing. Assuming you have the financial wherewithal and you haven’t been pushed out of the workforce, you have the opportunity to take your life in a different direction. And for some early retirees, things actually turn out that way.

But that’s not the general rule. Early retirees can have a harder time adjusting and can become disenchanted as they progress deeper into their retirement.

As one reason, early retirees still have high levels of energy and drive, and a strong need to be productive. However, if they have nothing planned, or what they planned is less fulfilling than expected, they may come to see retirement as boring and slow-paced, with too much free time and nothing interesting to do. The truth is early retirees may face more boredom day to day than their older counter-parts.

And what if their spouse isn’t retiring? When a spouse is still working, retirees can be restricted in their activities — they may not travel or participate in certain social events as much as they would like. There can also be changes in the dynamics of the marriage, how each partner relates to the other. If the retiree is a man, for instance, he may feel the loss of his bread-winning role as a knock to his self-esteem. That can put stress on the relationship – not immediately at first, but gradually over time.

And finally, the most important factor, staying socially connected. People who stop working while still in their fifties won’t have many peers doing the same. The early retiree often takes the journey alone.

Social contact is cut down in the number of hours, but also in quality. They may feel some distancing from friends because early retirees have different day-to-day goals and priorities. When conversations turn to their jobs, they may lose interest, feel out of touch, or feel they have nothing to contribute. This is healthy – early retirees can’t afford to hold onto their working identities. But the weakening of these social bonds could lead then to feel disconnected and isolated, and that’s not healthy. 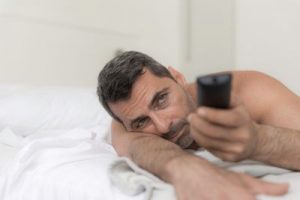 Early retirees will also lose touch with their friends from work. Early on in retirement, retirees begin the process of breaking away from their co-workers – again, a healthy, if not inevitable, consequence of no longer having daily access to them, and from no longer sharing the same priorities.

The breakaway happens for both younger and older retirees, but it’s more severe for younger ones. Older retirees lose fewer friends because they all retire at or near the same time, so they’re still sharing the same lifestyle.

Compounding this problem, younger retirees have limited opportunities to meet new people. For those retiring at 65 or older, there are senior centers which serve as social hubs, and on-line retirement clubs. Not so for those retiring early.

Socially isolation and feeling unproductive is harmful to one’s psychological well-being. Early retirees can feel under-valued, less self-confident, and less optimistic about their futures. From there it’s a downward spiral – these negative feelings can reduce their motivation to act, which further reduces self-esteem, and so on.

So, retiring young is not without its issues. But there are ways to make it work. First off, before you leave the workforce, make sure you have something to go to, something that’s meaningful and ongoing. Just walking out and thinking you’re heading into paradise will likely lead to disappointments.

Careful and detailed planning is essential. Planning leads to goal setting, which provides a constructive way of using time. Plan your activities, but also your social life. Put your efforts into maintaining regular contacts with friends and acquaintances — and in person, not just via electronics.

For whatever plans you come up with, be realistic. It may be hard to come up with activities or goals that are as rewarding as your job once was, but just keep at it, because giving up is not a viable option.

Keep an open mind about going back to work, and jump in again as soon as you recognize you’re not comfortable in retirement. The right job, one that is not stress-ridden or overly demanding, can provide various psychological and social benefits, but still let you feel retired.

Finally, retire with your spouse. You’ll have a greater array of entertaining diversions, feel less lonely and isolated, and the dynamics of the relationship will remain unchanged. If that’s not possible, then pay particular attention as to how you will spend your time with and without your spouse. Along these lines, give yourself permission to do the things you need to do to feel good about yourself.