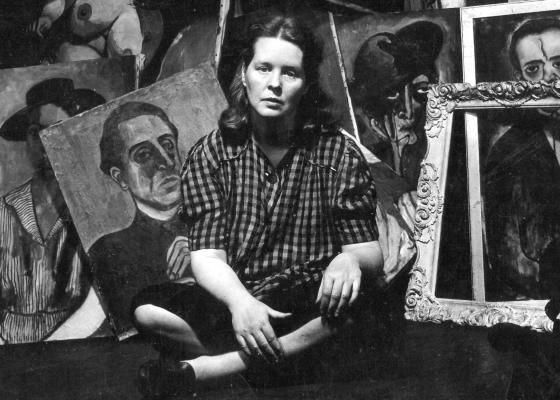 The Painter’s Painter no one remembers

Portrait painting is one of the oldest forms of documentation which still exists today. Its subjects range from Royalty to Madmen, from the oldest and the dying to the youngsters and the new born.

Alice Neel was a portraitist born at the birth of the 20th Century. Her portraiture was a new and silent message; people are not what you paint, but rather what they are when you paint them. Her subjects were friends, family, lovers all in their natural environments with no studio pretense.

As a painter she was far ahead of her time; as a person, she continually charged ahead with feminist and social ideas half a century before they were popular.

Born and raised in rural Pennsylvania, her mother cautioned her early on “I don’t know what you expect to do in this world. You’re only a girl”.

After finishing high school Neel enrolled in what is now Moore College of Art and Designing (1921) where she graduated with honors in 1925. She said she attended an all girls school so that she could concentrate on her art and not be ‘distracted by the opposite sex.’ That didn’t work out to well. In 1924 she married Carlos Enriquez, a well known Cuban painter, and shortly thereafter moved to Havana. In Cuba she was embraced by the fledgling avant-garde movement, and here she found her desire to push for equality of the genders and the downtrodden. Her first daughter, Santillana, was born in Cuba in 1926.

Unfortunately, a month before Santillana’s first birthday, she died of diphtheria. The trauma caused by Santillana’s death infused the content of Neel’s paintings, setting a precedent for the themes of motherhood, loss, and anxiety that permeated her work for the duration of her career.

Moving to New York in 1928, she gave birth to her second daughter Isabelle, known as Isabette. It was for the birth of her second baby that Neel painted the now famous Well Baby Clinic

Once again tragedy struck when Carlos returned to Cuba taking their daughter. On the brink of a nervous breakdown and an attempted suicide, she was placed in a mental hospital for almost a year until she could  be deemed ‘stable’ by the parties in charge.

Perhaps for Ms. Neel this was a blessing in disguise. Her style of informal compliance was heightened by the mental instability she suffered. Her paintings saw new meaning. She evolved the art of portraiture to an entirely new level. She now painted what we could and could not see. She created an environment through the feelings of her subjects. She placed her subjects in their world, not dragging them to hers. She created a line that moved as they did, that vibrated with their personality. Her colors became those of the subjects, not those chosen by the artist. Life in her new work was simply a documentation of the living.

Politically this new work was what she was armed to do. Her thoughts of socialism grew as did her work. On her canvases, one could feel the equality of persons, the respect for locality and choice. One person was an identity unto him/her self as opposed to being a representative of class or culture.

If the paintings have an emotional intensity, it is derived from the respect each was given. As a painter and a socially responsible artist, Alice Neel is someone we need to revisit, if we haven’t already.