​Evreux is the capital of the Eure department and is one of the oldest towns in France. The city was raided by the Vandals in the 5th century, then pillaged by the Normans in 892, then burned by Henry I of England in 1194, then taken over by Philip Augustus of France in 1194. It was at times controlled by the French and then by the English up to the 15th century, and suffered major damage during WW II.

Today it’s a nice town for strolling, particularly along the banks of the River Iton. There are several marked paths to make touring a lot easier. When you reach the main square you will find the town hall, and from there the promenade that runs along the river bank. All throughout the historical center you will find the half-timbered houses, restaurants, and a variety of shops. 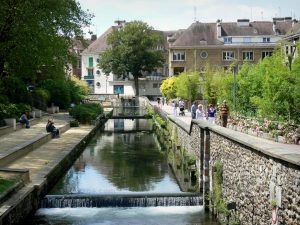 Page 11 of 11 Previous Page Next Page