Italy at its most authentic

If you want Italy devoid of tourists and touristy stuff, the toe of the boot is the place for you. You’re not likely to hear an American ordering a latte’ at the next table or asking where you’re from. This region feels separate and isolated from the rest of the country, and even the Italians see it that way.

A visit to Calabria is particularly interesting if you’re of Italian descent. Most of our families came from the poorer Southern sections of Italy — Mezzogiorno — and Calabria is one of those regions, along with Sicily and Campania. You will get a feel for how your ancestors lived and get a sense of their age-old traditions. But you don’t have to be Italian to appreciate what Calabria has to offer. 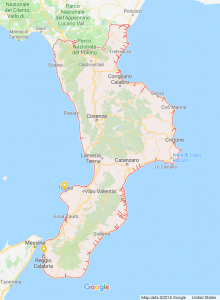 While the region is mostly undiscovered right now, it has enormous tourist potential. So it won’t be long before the lattes are ordered en masse. It’s one of the oldest settled regions on the peninsula, with scores of Greek and Roman ruins. It has it’s share of ancient hill towns and a charming centro storico (historic center) in its larger cities. And it has one of the nicest and cleanest coastlines in Italy, and natural areas not loaded down with the trappings of civilization. In other words, no McDonald’s.

Now, having said all this, I should mention that this is a region that requires some patience, and a healthy sense of humor. Silly things have happened to me here —  a restaurant took my reservations but when I arrived they were closed; I almost ran into a cow wondering on a mountain road; our hotel informed me a few days before we were to arrive that we had to leave a day early because they were closing for the season.

You also won’t find much English spoken here. As I speak some Italian (just enough to get into trouble), this wasn’t a problem. However, my wife and friends would have had to work to make themselves understood had I not been there.

But the language is not an insurmountable barrier — there’s always someone who can speak some English, and you can always resort to hand signals and facial expressions. Besides, not knowing the lingo should never be a reason to stay away — otherwise, who would ever visit France?