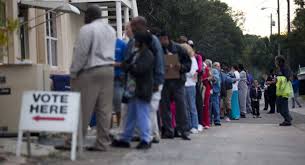 Recent election polls reveal poor results for the President and Republicans. A Monday (6/8) CNN poll showed Joe Biden with a substantial 14-point lead over the President. Respondents blamed the President’s handling of race relations and the coronavirus pandemic as reasons for picking Biden. A New York Times analyst says every high-quality national poll showed Biden leading two months ago and almost half show him leading by more now.

Polling data, especially the CNN poll, give Biden larger gaps than those given to Hillary Clinton in 2016, but how’d that work out for Democrats?

Republicans are – and should be – concerned about these numbers. But they’ve shown a continuing understanding of American government: power is more important than issues, especially race relations. There are 21 weeks left until the election and a lot can happen in that time. Remember where we were 21 weeks ago?

In fact, the nuanced argument of power versus race was made clear in a video that received national attention on HBO’s “Last Week Tonight” with John Oliver. The brilliant argument from writer Kimberly Jones is unparalleled in its ability to boil down decades of American race relations into a couple sentences.

“As far as I’m concerned (protesters) can burn this bitch to the ground. And they are lucky that what black people are looking for is equality and not revenge.” That, in 30 words, is the difference between power and race.

In the late 1960s, when African Americans often violently argued for civil rights, the conversation would invariably lead to a discussion of integration versus desegregation. The more militant protesters just wanted freedom to be, and not integration, into white society. What they argued came to reality: integration destroyed black businesses, schools and neighborhoods. They’ve barely recovered today!

In 1960 the black median family income, measured in 1981 dollars to account for inflation, was $9,919, compared with $17,259 for whites. In 2016, according to the Brookings Institute, the net worth of a typical white family was $171,000 nearly ten times greater than that of a Black family ($17,150). In 1960 the gap was about double. In 2016 it was nearly ten times. After nearly sixty years of integration the wealth gap between black and white families in America had grown nearly 500 percent.

The ability to control capital, obviously, is crucial in a capitalist system of economics. Controlling your own economy is powerful whether we’re talking about a household or a community.

In 1921 the segregated black community in Tulsa, Oklahoma couldn’t spend money in white Tulsa, so a well developed black economy was built. It thrived so well that Tulsa’s black economy was called Black Wall Street. That all came apart, however, when false rumors circulated that a black shoeshine teenager made a pass at a white girl. The white community rioted and burned Black Wall Street to the ground. More than 3,000 African Americans were killed. Six hundred black businesses were destroyed. More than a thousand homes were burned to the ground and ten thousand black residents were left homeless. Banks and lending institutions refused loans to rebuild. The city of Tulsa refused to allow outsiders to come in with help.

If you still need convincing, study the path of Hezbollah, a terrorist umbrella organization created from Shia Muslims in Iran and Syria. Hezbollah terrorized Lebanon in that nation’s civil war. Today, Hezbollah has a major voice in the Lebanese government, even receiving support from the Lebanese Christian community. The Hezbollah political wing fought its way into the Lebanese government through voting. Never mind what Hezbollah stands for. It has a seat at the table through the power of the vote.

Americans in the street protesting abuse of power by law enforcement and government have a chance to exercise political power through the vote on November 3rd. It might be the most important election in American history, more important than the election of Barack Obama in 2008. We can’t stay home because we don’t like what either side is saying about race relations.

Waiting for a handout from a candidate or, even a government, isn’t power. Capturing political power is the point of this election. If we miss that opportunity on November 3rd it may never come this way again.