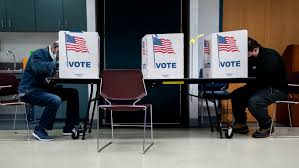 It’s not left or right thinking.

In 1954, the U.S. Supreme Court ruled that America’s public schools needed to be desegregated ”with all deliberate speed.”  Two years later in 1956 some extremists in the Virginia Commonwealth decided to end public education all together rather than desegregate Virginia schools. Without question Virginians don’t like to be told what, how or, even, if their children should be educated.

Youngkin tapped into that generations-old anger and Tuesday night rode it to the Governor’s office in Richmond, Virginia, the capital of Virginia and, by the way, the capital of the Confederacy. Outwardly, Youngkin stayed away from the racial anxiety fears polished to a fine glow by Donald Trump.  But they’re still there. The lie that critical race theory is taught in school classrooms is a dog whistle lie that people responded to in Virginia.

CRT isn’t part of any public education curricula in Virginia except in the minds of parents who don’t want their children to learn about the ugliness of their parents’ social past. Perhaps the final nail in the McAuliffe campaign happened a couple weeks ago when McAuliffe blurted out that parents shouldn’t have a say in public education. In Virginia, that cut too deep.

Here’s a look at how Youngkin supporters in Virginia looked at the issues raised in his campaign.

There’s another issue at stake here. Virginians also said the economy and jobs were the reasons for their Republican votes Tuesday. But that’s an all-encompassing trend in politics.  “It’s the economy, stupid!” is a longtime political maxim that vigorously holds true today.

But the results in Virginia may not necessarily portend troubles for Democrats going forward. Progressives? And extreme progressive ideals?  That could be another issue.

Voters in New York City elected a Democratic mayor, a black man. Eric Adams is a former NYPD captain and considered a middle of the road politician. He won’t be defunding police, for example. Neither will voters in Minneapolis who gave a resounding No to a plan that would replace police with a public safety department. That went down by 13 percentage points in the city where riots erupted after police killed George Floyd last spring.

History was also made in Boston, Cincinnati, Durham, North Carolina and Pittsburgh where Democrats, women and people of color were elected to the mayoral offices in the midst of all this so-called Democratic backlash from voters. Voters in Boston elected an Asian woman. In Cincinnati, voters elected a South Asian man as mayor and a Democratic City Council to power. In Durham, a black woman, a former judge, will be the new mayor.  And in Pittsburgh voters elected the first black man to the mayor’s office. In Buffalo, an avowed democratic socialist, a black woman, may even go down to defeat to an incumbent candidate, a black man, she beat in the primary.  He campaigned for write-in votes and it appears he’ll keep his job anyway.

Boston, Cincinnati, Durham, Pittsburgh and Buffalo aren’t progressive strongholds from California. They’re historic American cities in the East, South and Midwest where voters give their votes grudgingly to people who represent their best interests. And those interests appear to be middle-of-the-road issues that affect their communities. That’s a reminder of another political truism that was made clear in voting Tuesday: all politics is local.

If anything, Tuesday’s vote showed that people are tired of both Democrats and Republicans wrestling over power instead of governing. Voters have learned that the stock market has nothing to do with the economy and money in the pockets of average Americans. They’re also angry that politics at conference tables in Washington has nothing to do with conversations around American dinner tables.

Politicians who ignore the issues of voters will – even should – be out of office at the midterm elections next year; Democrats as well as Republicans.

And it’s about time.