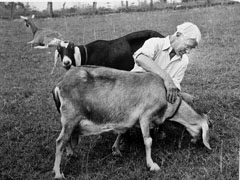 “Time is the coin of your life. It is the only coin you have, and only you can determine how it will be spent. Be careful lest you let other people spend it for you.” ….CS

If you stand at the highest point on Connemara Farm in Flat Rock, North Carolina, you can look out over 248 acres of meadows, woods & streams, a beautiful lake, and the barn of a working dairy farm. In the old days there were over a hundred goats here, mostly raised for their milk and cheese. The owner of the farm was an internationally known dairy goat breeder. When being introduced to a famous Japanese breeder she mentioned her name, and her husband’s name.  The breeder said…”that’s nice, what is it your husband does?”

The American breeder was  Lilian ‘Paula’  Steichen Sandburg. Her brother was the brilliant photographer Edward Steichen.  Her husband, of course, was the great American poet, writer and gentleman, Carl Sandburg.  It was Ms. Sandburg who carried much of the weight for supporting the family in the early years, while Carl was finding his way as a struggling journalist and author.

Her Connemara dairy goats were known throughout the world. Her trophy room at Connemara is adorned with blue ribbons and pictures of her famous goats. Even today, long after her passing, a small herd bred from her original stock still exists at the farm. These are raised and given away when the herd grows too large. The recipients must promise to keep them as pets and not slaughter them.

“Those in authority must retain the public’s trust and the way to do that is to distort nothing, to put the best face on nothing, to try to manipulate no one.”

— John Barry, in “The Great Influenza”