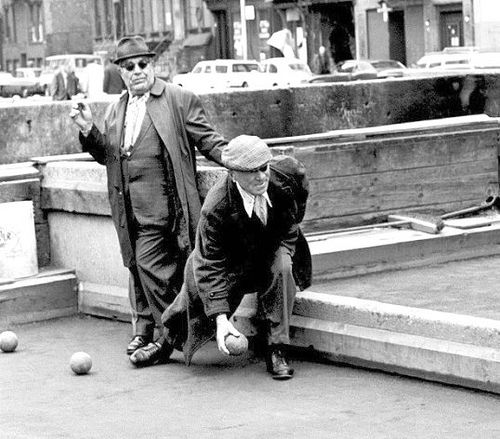 A great sport, minus the sweating.

As a young boy I remember going to the park off Jerome Avenue on Sunday afternoons in the post war Bronx, to play baseball or basket ball or ring-a-levio, with my cronies. Over on the other side of the park were a dozen or so older men smoking small cigars and speaking Italian while one of them rolled a ball down a dirt alley hitting other balls, to the delight and loud screams of his compatriots. We didn’t pay it much mind at first, but after a while even the young became curious. 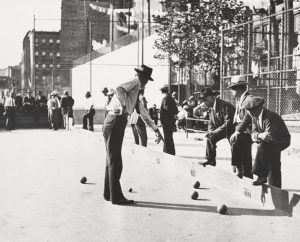 Bocce (Bot-Chè) is an ancient game, started during the time of the Roman Empire, quickly spreading throughout Europe and in several places around Scandinavia.

Bocce is traditionally played on natural soil and asphalt courts. These courts are usually about 76 to 100 feet long and 10 to 13 feet wide. The Bocce balls can be made of metal, wood, or various kinds of plastic. Unlike lawn bowling balls, bocce balls are spherical and have no inbuilt bias. A game can be conducted between two players, or two teams of two, three, or four.

A match is started by a randomly chosen side being given the opportunity to throw a smaller ball, the pallino (‘bullet’ or ‘little ball’)  from one end of the court into a zone 15 feet in length, ending about 8 feet from the far end of the court. If the first team misses twice, the other team is awarded the opportunity to place the pallino anywhere they choose within the prescribed zone.

The side that first attempted to place the pallino is given the opportunity to bowl first. Once the first bowl has taken place, the other side has the opportunity to bowl. From then on, the side which does not have the ball closest to the pallino has a chance to bowl, up until one side or the other has used their four balls. At that point, the other side bowls its remaining balls. The team with the closest ball to the pallino is the only team that can score points in any frame. The scoring team receives one point for each of their balls that is closer to the pallino than the closest ball of the other team. The length of a game varies by region but is typically from 7 to 13 points. 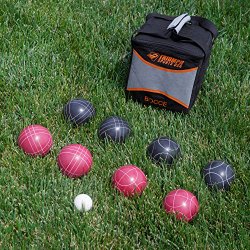 Players are permitted to throw the ball in the air using an underarm action. This is generally used to knock either the pallino or another ball away to attain a more favorable position. Tactics can get quite complex when players have sufficient control over the ball to throw or roll it accurately.Those are the rules….give or take.

However, like everything else in the Bronx, we play by our own rules. So, here the main rule is to yell and scream, give players on the opposite team grief, chew on a small evil looking and smelly cigar, and drink red wine made by someone’s grandfather in the cellar of his building. (Incidentally the wine is usually excellent.)

The game may not present the aerobic challenges of distance running, nor the strength needed to play tackle football, but it is a great way to spend time with friends screaming and enjoying adult beverages. There is probably something about eye hand coordination that can be said of the game, but what the… if you’re enjoying yourself on a sunny afternoon, who really cares. 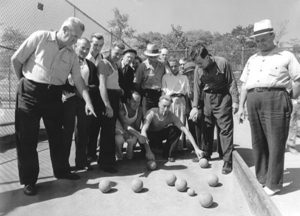 Try a game of bocce. Any inner city park will get you started. If you live in the country even better, construct your own court…don’t worry about the dimensions, just call it a “private club”, and you’ll be good to go.