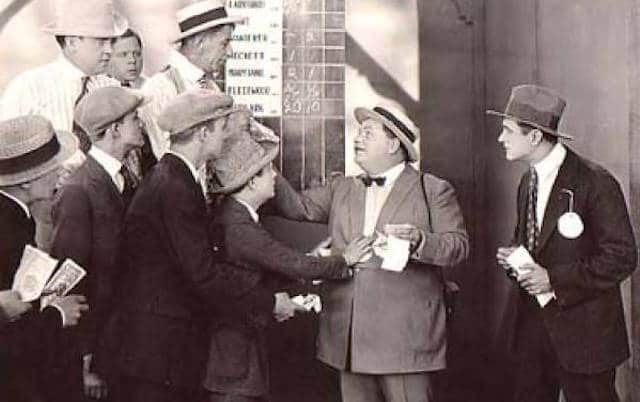 Can old fashioned tough guys save the day?

I grew up in a tough neighborhood. Working class maybe, but tough. Street crime was everywhere and personal safety was never guaranteed. The days of the rackets were pretty much nearing their end, but the small grifters, bookies and loan sharks were still very much in evidence.

The streets were teeming with people in the hot summer days and empty by the time the snow was above the car windows. You could tell the seasons by the sports people were playing and betting. Baseball in the summer, football in the winter, and basketball when they had nothing better. But the big deal was ‘the track’. We had Yonkers Raceway and the Meadowlands for the trotters, Belmont & Aqueduct for the flats, and a host of other smaller tracks that you could get results on from a radio tuned to the right frequency.

Some years later the Off Track Betting (OTB) parlors sprung up. They were developed so upstanding citizens no longer had to go to the book makers.  This worked for a while until the betting parlors went down hill and became trashy with losing tickets and spent racing forms strewn on the counters and floors. The empty food and coffee containers lent an atmosphere of extreme rejection.

Another problem for OTB was the bookies and the gents they answered to. This was not good business to have a legal operation right next to your shop. If you wanted to make it as a “guy” you had to offer better odds and of course you did not collect taxes on winnings. You also did not enjoy seeing customers filing in to the OTB parlors, and might have spoken a few choice words to that end.

I remember a small store in the town in which I grew up. This old place had a glass counter, always empty and a small wire rack that held 6 or 8 candy bars. Those were the only furnishings. In the background you could hear races being called and men reacting to the call. One day when I was walking by and was extremely hungry I stopped in and picked one of the candy bars from the wire rack. A large ‘full figured’ gent quickly snatched it from my hand and told me it wasn’t for sale. He included a look that meant the ‘not for sale’ was his final offer.

As I got older I realized I had walked into one of the countless bookie joints in my neighborhood. There were quiet, dark, seemingly well run and outside of the players and the local cops, not known by the good ‘civilians’. Once in a great while the local politicians would create a stitt about gambling and then add other small infractions to the list and swear to get to the bottom of this. But after the hoopla died down they went right back to looking the other way and taking their weekly cut.

I also remember one of the local mob guys counting his action, and laughing about putting OTB out of business when the cops and politicians couldn’t. The mob ran the show. They ran it for years because people wanted action and the cops and whomever else took bribes simply looked the other way. It was termed a victim-less crime. Except it wasn’t, just ask the jack-asses who lost their shirts…and socks and shoes too!

That’s the way it went. People bet on every conceivable sporting event known to man. Hundreds of bets on hundreds of games with multiple types of bets on every game. The Super Bowl has over 100 different bets you can make before the game reaches half time.

But that was then and this is now. Finally a hero came and put the bookies out of business. His name is Coronavirus, or to his friends, Covid-19.

Hopefully the mob will kick his ass as well…and soon!