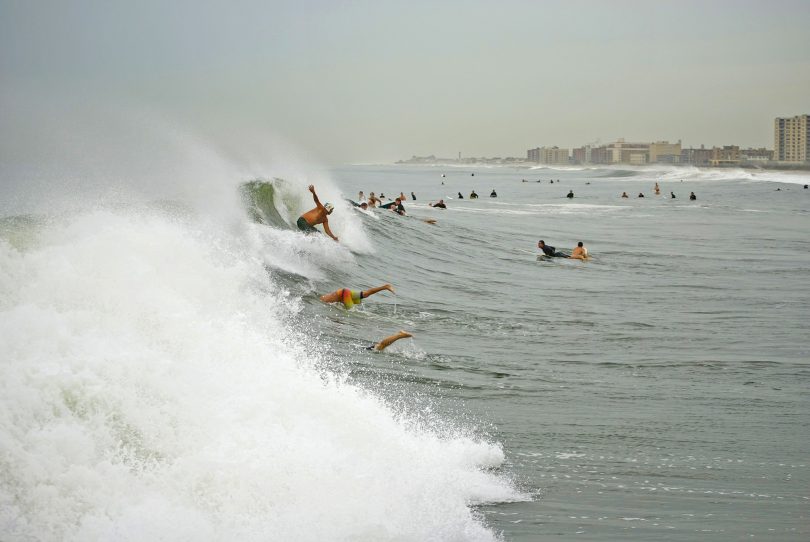 Move over Jan & Dean. Hey Beach Boys, if you want to ride the really big waves, take the A Train out to Queens. Forget Waimea Bay, the Bonsai Pipeline, Venice Beach, Down Under, forget them all. If you want a really good set of breakers head to NYC.

So  if you want to surf, Rockaway Beach is the place to wax and ride.

No, we are not kidding. The breakers at Rockaway Beach have been around and ridden for over 100 years. Legend has it the first surfers were up on their boards before the First Word War.

An iconic story says that the legendary Duke Kahanamoku, the father of all modern surfers, paddled out in the year 1912. The tale that east coast surfers swear to is this:  The duke had just won a gold medal in swimming at the Stockholm Olympics and while on his way back to Hawaii stopped in Queens (one of New York City’s 5 boroughs) and decided to catch some waves. He liked what he saw and caught waves all morning. True or not, a great story.

What is true is that today, over a century later, the surf break off Rockaway is the only legal surfing spot left in the Big Apple.

If we’ve gotten your attention, and got you ready to grab a board and go… check out this great video on How to surf Rockaway Beach. A lot cheaper than flying to Maui!

(It makes you  think how many other places in this great country would surprise and delight us with their ancient lore and delightful legends, some of which may even be true. We’ll be telling you about those other spots in the weeks to come.