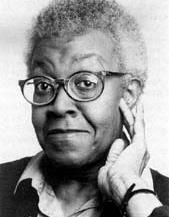 An introduction to Gwendolyn Brooks

To thank her Lord and lucky star

For eye that let her see so far,

For throat enabling her to eat

Her Quaker Oats and Cream of Wheat,

For tongue to tantrum for the penny

For ear to hear the haven’t any

For arm to toss, for leg to chance,

For heart to hanker for romance….

Poetry is the most cyclic of all the arts. It goes around once, becomes an important art form and social commentary, and then recedes and remains hidden once again. There are poets who are quoted daily, those whose names you may know, still others you think you may have read, and those you may not be familiar with, but certainly should be.

Gwendolyn Brooks is a poet who if you don’t know, you should.

Ms. Brooks turned the South Side of Chicago into a living panorama of people places and ideas, capturing the soul of a people and a culture which was still a mystery to the majority of Americans. Her work was not limited by any single form, she worked in sonnets, ballads, blues and long form.  She has been described as a “technical virtuoso” by Elizabeth Alexander, the American poet, essayist, and playwright.

More than her passion, which was great, her belief in those that peopled her poetry was even greater. She treated her work as the common ground upon which all could walk. No one was ever a foreigner.

Born in Topeka, Kansas in 1917, she moved to Chicago at six weeks and made that city her home for the rest of he life. She grew up on the South side attended several high schools — some integrated, others only Black.

Her mother was a teacher in Topeka at the same school which later was the setting for the now famous Brown v. Board of Education (Declaring segregation in the schools illegal). Her father’s dream of a career as a physician were dashed when family needs forced him to drop out of school and take a job as a janitor at a local music company.

Young Ms.Brooks published her first poem, “Eventide”, in a children’s magazine, American Childhood, when she was 13 years old. By the age of 16, she had already written and published approximately 75 poems.

Her poems, many published while she attended Wilson Junior College, ranged in style from traditional ballads and sonnets to poems using blues rhythms and free verse.

Best known for her poems, “A Street in Bronzeville”  and “Annie Allen“, the later winning her a Pulitzer Prize in 1950, she was the first African American woman to be awarded that prestigious award.

In 1976, she was the first African American woman to be inducted into the American Academy of Arts& Letters.

Here is a small sample from “A Street in Bronzeville”

The Ballad of Chocolate Mabbie:

It was Mabbie without the grammar school gates.

And Mabbie was all of seven.

And Mabbie was cut from a chocolate bar.

And Mabbie thought life was heaven…

Her work was simple and powerful. She understood the life Black people lived and chose to display that life in both its glory and sorrow.

Gwendolyn Brooks was a poet extraordinaire. She was a writer whose work, like all great work, stands the test of time, and an artist whose work will hopefully come back around on that cycle.

A great place to start reading Gwendolyn Brooks is a small book titled: