Ancient Rome had an extensive code of laws that covered the full range of legal issues one might face. In fact, much of what they created served as the basic framework of civil law that is still part of modern legal systems. There’s a reason why legal jargon is still peppered with Latin.

But what if you were a victim of a crime? The odds of that happening were pretty good. Ancient Rome was a dangerous place, especially at night. When you weren’t in the immediate vicinity of the forum, the city — the real city — was a maze of alleyways and lanes without any street lighting and with lots of unsavory characters lurking around the next corner. You had to be a little foolish to venture out without a retinue of body guards.

There also wasn’t much of a police force to speak of. The city did have a group called the Vigiles, and later on Augustus established the Urban Cohorts, and they tried to maintain some semblance of order. But the Urban Cohorts focused mainly on doing the bidding of the emperor, and the primary responsibility of the Vigiles was fire fighting. By fire fighting I mean they mostly pulled down buildings to contain a fire. Many of the insulae (tenements) in the real city were built of wood, so the city was highly combustible, and a bucket-chain approach was just not going to get it done. Vigiles were not very popular — it was unlikely you would be pleased when they told you that the best place to start a fire-break is your house. 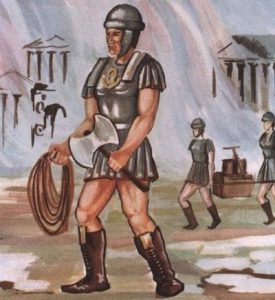