There are lots of bozo’s on this bus.

I was just looking at the Google News headlines with all the craziness out of Washington. You have to wonder about the veracity of people making decisions in America. Forget the White House insanity. Consider Wells Fargo and the abuses in their mortgage and auto loan lending practices. The bank faces a billion dollars in fines and there’s a question as to whether or not the billion would cause the business financial harm.

Then I turned to a Tony Kornheiser podcast and heard his conversation this week with Academy Award winning film director Barry Levinson. He did the current HBO film Paterno, starring Al Pacino as the late Penn State football coach Joe Paterno.

Among Levinson’s brilliant body of work is one of my all-time favorites, The Natural, with Robert Redford. Levinson’s run includes Rain Man, Good Morning Vietnam, Bugsy and Wag the Dog.  So, what have you done with YOUR life? 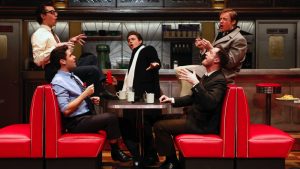