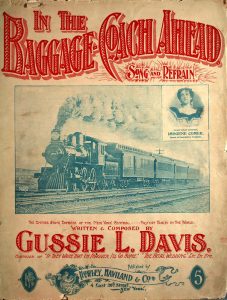 Giving credit where it’s due.

If you are of our generation, then you certainly know the tune “Irene, Goodnight”.

You may have heard it from the great legend of folk/protest music, Leadbelly (Huddy Ledbetter) or from the banjo of Pete Seeger. It is a love song that starts out tragically with the young man telling us he was married last Saturday night, and now that the couple has parted, he wants to go to the river and drown.

It was one of the tunes that gave Leadbelly a huge start after a very checkered and uncomfortable past. It was a standard for Pete Seeger and a big hit for his group the Weavers.

Yet until very recently the author was little known and less revered. Many times Leadbelly was given the writers credit. Good for him and the small extra amount of money he received, but ‘it just ain’t true’. 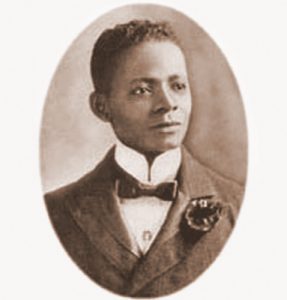 Gussie Lord Davis was an African American born in 1863 around Dayton, Ohio.

Though small in stature, Gussie Davis had incredible talent and phenomenal fortitude. He decided quite early in life to be a song writer. But shrewdly understanding that most songwriters died broke, he figured the only way to be successful was to have an education in music. He applied to the Nelson Musical College in Cincinnati to foster his studies. He was turned down. No Black people were allowed to attend Nelson Musical College. Undaunted, he took a job at the college as a janitor earning $15 a month, and on the sly was taking lessons with several of the music teachers.

In 1880, he wrote one of his most well received songs “We Sat Beneath the Maple on the Hill”, which is still extremely popular today in country and Bluegrass circles. Today, the song is called “Maple on the Hill”, and has been recorded by the likes of Ralph Stanley, among many others.

Unfortunately, the problem of race rears its ugly head again for Gussie. Being Black, he couldn’t find a publisher willing to publish anything from an African American. Always the optimist, Gussie solved that problem by paying out of his own pocket to have the song published and distributed. “Maple on the Hill” garnered overwhelming success, becoming the lynch-pin for a storied career. He always attributed his success to being able to:

‘reach for the tender spots that lurk deep within all of us, no matter how thick or tough our outer crusts may be’.

In an era of sing ‘em and weep songs, Gussie did more than almost anyone to open the tear ducts of the American public.

His career ended on a positive note. Unlike many broken songwriters. Gussie Lord Davis received numerous accolades, and a solid bankroll. He was a  very popular and well known songwriter on New York’s Tin Pan Alley, and at the World’s Fair of 1895 he won a second prize in a contest pitting America’s top 10 songwriters against each other. The prize was $500 in gold!

… so next time you hear “Irene, Goodnight”, you’ll know just where it came from.