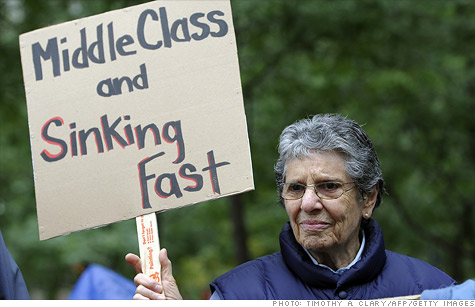 Getting us moving in the wrong direction.

People often assign the following to Adolph Hitler’s Minister of Propaganda Joseph Goebbels: “If you tell a lie big enough and keep repeating it, people will eventually come to believe it.” It’s unclear if Goebbels or Hitler said it first. If you believe in The Big Lie, though, understand that it only has support as long as the State can shield the people from its consequences, often with more lies.

Let’s go back a forty years to August 5, 1980. That’s when Ronald Reagan, former union president of the Screen Actors Guild, fired 11,345 striking members of the Professional Air Traffic Controllers, PATCO. They ignored his order to get back to work so he banned them from federal service for life. It was the beginning of the end of American unionism, a movement that had strength for some fifty plus years. It’s never been the same.

Reagan has been called The Father of Modern Conservatism. To me it’s a title that is undeserved unless modern conservatism is meant to dismantle education, declare war on labor, kill the middle class and redistribute wealth to the wealthiest Americans. Reagan’s War on Education started in California where he said: “the state should not subsidize intellectual curiosity.” He brought that same mentality to Washington in 1980.

In 2015 the Pew Research Center analyzed data from the U.S. Census Bureau and the Federal Reserve Board of Governors. The report defined “middle-income” Americans as adults whose annual household income is about $42,000 to $126,000 annually in 2014 dollars for a household of three. “Under this definition, the middle class made up 50 percent of the U.S. adult population in 2015, down from 61 percent in 1971.”

I argue that America’s middle class wouldn’t exist without unionism.  Collective bargaining guaranteed income “futures”, allowing people to assume economic triggers such as home ownership, economic upward mobility and other trappings that supported families and the things families needed to buy. The middle class also became taxpayers, which supported government efforts to spread that wealth throughout the culture insuring societal stability. America benefited until Reagan’s War on Unions established a foothold and unions could no longer support middle class growth. Since August, 1980 unions have barely supported themselves!

We’re seeing unintended consequences now with rising social anger.  Income inequality is feeding unrest, especially among young people, from all ethnic groups who have waited to be middle income wage earners and consumers. But now that prospect is fading, and they don’t like it!

In 1970, the proportion of income held by U.S. middle income households was 61 percent. In 2018, that number was down to 43 percent. By contrast, the proportion of incomes for upper income households went from 29 percent to 48 percent over the same period, and the strength of collective bargaining wasn’t around to stop that transfer of wealth. If that’s conservatism, you can keep it. I’ll never understand why people who could benefit from collective bargaining – the working class that was once the middle class – now fights unionism with such anger and ignorance. They must believe the lies.

Here’s more evidence of the conservative lie. Economists put a lot of weight on a ratio of national debt to gross domestic product. When you applied for your last loan the banker might have put it this way: “Your debt ratio is too big. You don’t show you can pay us back.”  The U.S. debt is a picture of our ability to support the dollar compared to other countries and, especially, our ability to back our bonds sold to people like the Chinese government.  Those bonds amount to a check that said we had sufficient funds to support them. We all know want insufficient funds means.

In 1980 when Reagan took office the U.S. debt to GDP ratio was 32 percent.  After forty years, 24 of which were run by conservatives in the Oval Office, that debt ratio last year was 106 percent. We’re overdrawn! Thanks to COVID-19’s new normal, the 2020 ratio is projected to be 136 percent. That doesn’t seem to be too conservative, does it?  Maybe all their arguments of fiscal conservatism actually were meant to hide the institution of social conservatism to keep America what it was after World War II. Making American Great Again makes more sense in that context!

Now I can hear all the noise and finger pointing about socialism and all the lies surrounding those allegations. While we’re confused by that argument, fascism and oligarchy, rule by a few, is setting up housekeeping through the back door. Beware the distractions! Once Reagan sold us Trickle Down, it appears we’ve been hooked ever since. We’ve believed the wealthy will share and they won’t. Beware those who send an email, text or meme wanting to sell you a trickle of anything!

Don’t believe the lies, no matter how big they get! Register, learn and vote November 3rd. It’s our last line of defense against a coup that started nearly forty years ago to the day.