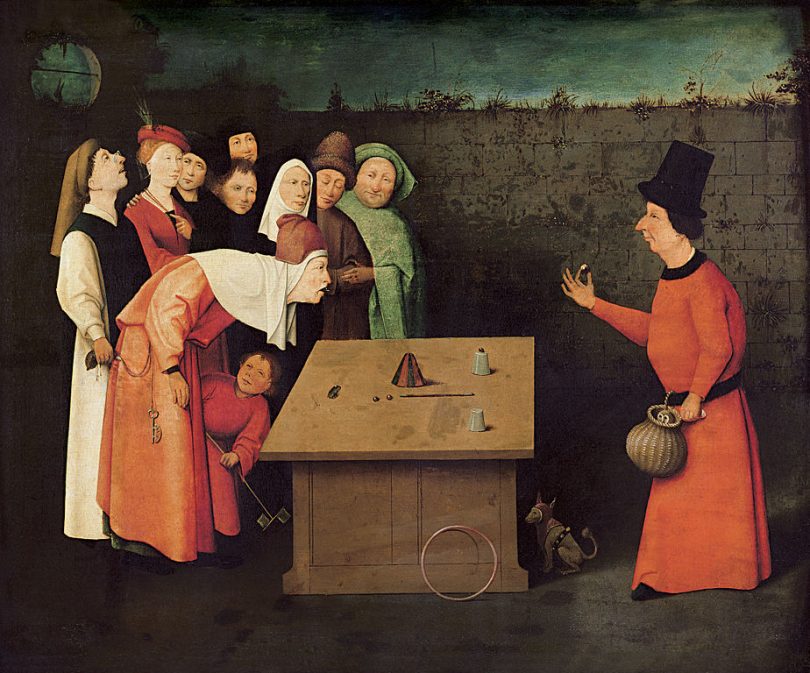 The ancient art of fooling you.

The methods of magical performance are not usually seen as examples of folklore, but they have many of the same properties as a traditional story or ballad. Often the tricks are told to the audience in story form, passed on as myth or even legend.

Sleight of hand tricks are passed down from performer to performer the way a ballad or folktale is over the years. One of the very first tricks to be recorded was the cup and balls trick. This is the one where the cups are placed over the balls and the audience has to figure out where the balls are at the reveal, or where they are not if they have been disappeared. (This trick some say goes back to the Egyptians, and is still performed today.)

Hocus Pocus Jr., author of a textbook of magic printed in 1605, includes in his treatise a number of other simpler tricks with balls, such as making a large ball pass through the table into a cup from below. He also offers various ways to make fake weapons with which the magician can appear to stab or cut himself and then be restored to full health. The idea is to present the magician as a ‘supernatural’ being, capable of far more than any audience member could imagine.

An important way in which magic acts reflect the folklore of the day is in the style of presentation. The ‘magic’ effects must defy any sense of the natural order. In a more superstitious era when the supernatural was seen as the province either of educated eccentrics or demon enhanced magi, magicians learned to present themselves as somewhat ambiguous figures, clearly working with powers from the beyond.

Coullew of Lorraine, a French performer active during the early 18th Century  introduced an effect in which the magician uses his powers to safely catch a bullet fired at him, a plot which performed in a different and safer manner, would become a signature of the Victorian performer Chung Ling Soo (arguably among the best magicians of all time) and which is still performed using yet a third method by Penn and Teller in the present day.

Penn and Teller have of not yet experienced the same cause which led both Soo and Coullew to stop performing… both men died performing the bullet catch!!!

Over the years there have been magicians that have in every way captured the imagination of the public, some have even gone on to become super stars. Houdini was one of the most recognizable faces around the world in the early part of the 20th century. Harry Blackstone was another who gained international notoriety.

In the later part of the last century magic took on an even more surreal aspect. David Blaine and several others no longer did simple magic tricks but instead used their bodies as a canvas to demonstrate concepts beyond the imagination.

Blaine had himself buried in a huge block of ice for 57 hours in a site right off New York’s Times Square, which allowed pedestrians to walk by and view his ‘frozen’ body.

David Copperfield made an elephant disappear on stage in front of a live audience. Ricky Jay, one of the most amazing ‘hand illusionists’ had a Broadway Show titled R.J. and his 52 Associates, aptly titled for the decks of cards he uses.

As with all things old and new we are always mystified by what is possible… especially when it comes directly from the impossible.