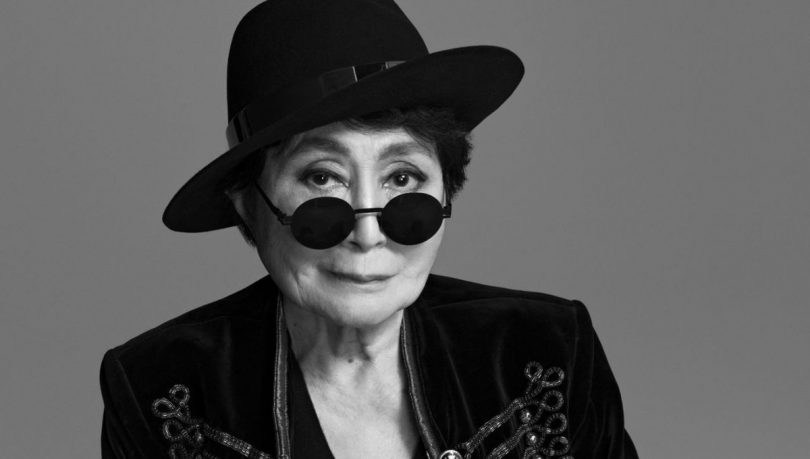 Yoko Ono before she was Yoko Ono.

She is best known as the woman who broke up the Beatles. She is almost as well known as the woman who screeches and screams on John Lennon’s later albums. She is the mother of one of his children, and a pop star in her own right. Although all these are true, none of them speak about her talent,  and the fact that a woman who is near 90 is still making important work world wide, long after her famous husband has been assassinated. She is of course Yoko Ono.

Yoko Ono was born in Japan 89 years ago to a wealthy and established family. She was an excellent student, her education coming at prestigious private schools. Her life’s work as an artist began in the1950’s. The immediate reviews were tepid at best and often just plain bad.

As an artist, like most artists she wanted fame and notoriety, but unlike most she had no need to care for the wealth that went with it. She was born to money.

Although an outlier to the rest of the world within the art community, she was a well respected experimental artist. The collective consciousness of the general public could not imagine this small woman having the power to do the things she did. It could not relate to the culture altering performances which she began just as the avant-garde was beginning its flow.

Ono’s art comes from within. Her dedication to her craft and her dedication to the feminist ideal have propelled her much further than her art itself. It is not naïve to admit that the reason, at least in part, that galleries all over the world show her work is that she was married to a Beatle. She still  champions their causes; world peace, environmental action, woman reproductive rights, to list a few.

In the hero culture which our society has created we tend to see the hero as an isolated figure somewhere off on a distant island where after their experiments in the word of imagination, they send back messages in a bottle to be deciphered by the rest of society, or at least those who have the codex for interpretation.

When the hero is successful, the village rejoices; when at fault or in failure, the same villagers abandon the hero’s power, often casting him/her/they aside for another younger more fertile hero. Far too many important artists have been treated to this quiet dismissal. Women in general, Yoko included, have been sorely overlooked by the art establishment.

By the 18th century the ‘male only’ model begun to expand. Women were seen as humans, rather than as things to be used. Their power of reason and skill in predominantly masculine matters had washed some of the tarnish off our rusted and outmoded thinking.

Culture now had to expand to admit the newcomers. They brought with them hundreds of years of silence, learning and hidden skill. They created what had been absent and continually built upon it. They began the historical process which although in its infancy is still going on today.
These are the  roots of feminism, which Yoko Ono championed through out her life.

That said, while most critics say Yoko was brought to the fore by her marriage to John Lennon, I feel it was the exact opposite for her as well as for Mr. Lennon. Yoko Ono gave up a highly visible career to be with the man she loved. She dissolved her individuality into their collective identity. She was no longer the artist, but now was the partner. She was no longer a strong feminist icon, but now part of a group, a very progressive one, but still that group had little individual notoriety.  John Lennon gave up his enormous success as a Beatle and now became a pure artist, living a life far outside the ‘pop’ world. He was in full  partnership with an important feminist artist who at every step of the way was part friend, part lover and part guide.

Ono’s work, though experimental, still stands the test of time. Her “Cut Piece“, which premiered in New York in 1965, (earlier in Europe)  saw her sitting absolutely still on a stage where any member of the audience was invited to come up and cut any piece of her clothing. A very simple and somewhat dangerous piece, but upon further review it conjures a history of women, and the art they have been creating over the last half century. It is a new way to recognize history through art. A way to extend our own thinking beyond the gallery and museum. Ono has been at the forefront of this type of ‘outlier art’ for most of her career.  She stands not only as an important artist, but a full collaborator in a twosome that personified equality and respect.

Please relook at this important artist. As in all things of value, look Before You Leap. (Youtube is a great source)

Oh, and by the way, the idea that she broke up the Beatles has pretty much been debunked.