Some think there’s a best way of eating, but in the end it’s all about balance.

McFadden’s Resort in Florida in the 1920’s offered a vegetarian diet. People thought they were crazy.  The list of “crazy” vegetarians goes on forever. It includes, the ‘good, the bad, and the ugly’. It runs the gamut from a saintly woman in India to a celebrity in Hollywood to a short Austrian house painter.

There are many levels of Vegetarian. I have had people tell me they are vegetarians, but they still eat fish. I have never seen a fish grow on a tree.  There are others who eat eggs and diary, and there are the few who eat only raw food. (If you haven’t tried that, think about it before you do!)

Vegan is the one that is, in the current vernacular, ‘totally plant based’.

Meaning that if it has a face on it, you don’t eat it. 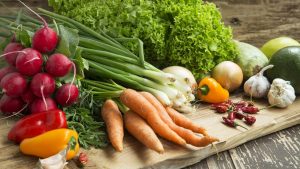