There’s more to Germany than Bavaria and Berlin.

Germany is one of the most under-appreciated countries in Europe. It ranks fifth in visitors, well behind France, Spain, Italy, and the United Kingdom. The truth is I’ve been to all of these countries a number of times and I would rank Germany in the top tier. It has a very different feel from other European countries, an interesting cuisine, engaging people, and more than its fair share of beautiful medieval villages and towns. Although a number of these had sustained major damage during the war, their historic centers have been restored to their original, and you won’t even notice the difference.

This particular itinerary focuses on the state of Baden-Württemberg in Germany’s southwest corner, and includes 6 towns, with a round-trip total of 264 miles. Stuttgart is used as the starting point, because it’s a large town with lots of hotels that sits right in the middle. It’s also a destination in its own right, although as an American you probably haven’t heard much about it.

The map below lays out the full itinerary, and that’s followed by a very brief description of each town. We don’t provide a lot of specifics because we’re more interested in the overall ambiance of these historic spots rather than their museums and the like. You can find that information on other websites, and we’ve referenced these throughout. But we do include pictures to get your travel juices flowing.

If the full itinerary sounds like too much driving, you can shorten it to about 190 miles by eliminating Baden Baden and Heidelberg, or you can divide into two two trips of about 150 miles each — the three northern towns on one day and three southern ones the next day. The choice is yours, but for the purposes of expediency, we’ve included all of them in one trip.

If you’ve read any of the other “Off the Path” articles, by now you know the drill. Load each town in your GPS, scout out restaurants before you go, and print out this itinerary so you have a hard copy while on the road.​ Finally, as we’ve also mentioned before, you might not fall in love with every town, but hopefully there will be a few that will turn you on. Regardless, you’re driving through the countryside and there’s lots to take in along the way.

One point about driving in Germany. The stereotype that Germans are orderly has a lot of truth to it. So while on the road, obey speed limits when you see them. The citizens expect you to obey their laws, as they do, and they don’t like it very much when you don’t.

Stuttgart is primarily a manufacturing center, but it also has parks and gardens, palaces and castles, various museums (including one for Mercedes-Benz), a zoo, opera, theatre, and an old town center. In other words, Stuttgart is a full-service city. And because it’s a business hub, there are a lot of hotels and restaurants and an active night life, and that makes for a good place to come back to after you’ve been strolling around small villages.

You’ll also find pretty good shopping. All along the the Königstrasse — the country’s longest pedestrian walkway — there are boutique shops, galleries and department stores. Just off the  expansive Schlossplatz you’ll find the 19th century Königsbau shopping arcade and the Kleiner Schlossplatz with its boutique shops and restaurants. 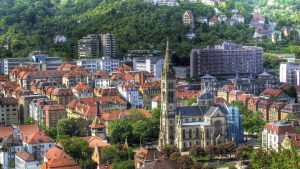 Schwäbisch Hall’s history extends all the way back to the 5th century BC, and it flourished from the 11th century AD as a producer of salt, the white gold of the Middle Ages. While relatively small, the city has an urban and cosmopolitan feel, having residents who represent over 100 countries. Yet Schwabisch Hall has retained its medieval flair — the old town is well-preserved and pretty much what it was 800 years ago. It has it’s original cobblestone streets, a protective wall, covered wooden bridges, towers and half-timber architecture (Fachwerk houses, they’re called). As you stroll around, you might feel as though you’ve stepped into a Grimm Fairy Tale.

Bad Wimpfen is perched above the Neckar River,  and is another of the spa towns that dot this part of Germany (“Bad” means bath”). As with other towns in this area, there were settlers here since the 5th century BC and it began to achieve some prominence once the Romans moved in and built a bridge and a fortress.

Present-day Bad Wimpfen is impressive and typical of Baden-Württemberg, with it’s various spas and therapeutic institutions. It has its share of historical sites, but what’s best about all of these towns are the twisting streets and alleyways, the interesting shops, the quaint cafes, and the old-world architecture — in short, it’s full of medieval charm. 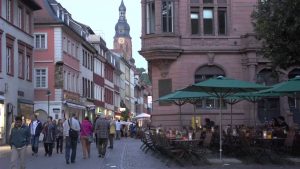 Heidelberg is regarded by many as one of the most beautiful cities in Germany. Located along the Neckar River and surrounded by hills, something of a town existed here since the 11th century. Heidelberg did face a problem with the French in the 1690’s, and the city had to be rebuilt just about from scratch in the 17th century. Since then, it’s been well-preserved — Heidelberg was one of the few that escaped destruction during the war.

It’s best known for it’s castle, which is an impressive sight, but the old quarter is lively, and has lots of romantic lanes for strolling, little squares for sitting, Renaissance buildings, cafes, restaurants, and boutiques shops. The old town is fairly compact, so it’s easy to explore on foot. 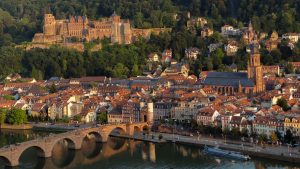 This is a chic cultural town that offers high-calibre indulgence. The name means Bathing Bathing, and so you might have guessed that Baden Baden is a spa town: it’s built on thermal springs at the edge of the Black Forest. They say going to the baths here is a wonderful experience, but you have to be able to handle the nudity — your own and everyone else’s. If that’s not for you, you can always visit the well-preserved Roman Bath Ruins (fully clothed), castles, and various other historical sites. And if you’re still not happy, you can try your luck at the casino.

Baden Baden also has a reputation as a hang-out for the rich and famous, so you might be able to do some interesting people-watching. Beyond all that, the old quarter of Baden Baden has lots of quaint alleyways packed with elegant boutiques, galleries, antique shops, and of course restaurants and cafe’s. 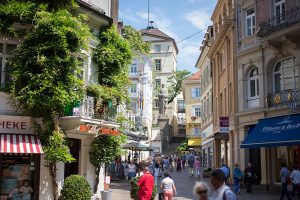 The birthplace of writer Hermann Hesse is located in the Black Forest and has the Nagold River flowing right down the center. First mentions of Calw go back to 1075, and over the centuries it developed into an important town. It’s wealth sprang from cloth making and dying, lumber, and salt.

The old town is under monument protection, and much of the real estate here dates back to the 17th century. As you stroll through the cobble-stoned alleys in Calw, you’ll  pass half-timbered houses, interesting nooks and crannies, and lots of charming cafes and shops.  The Calw “Lederstrasse” is an urban shopping mile, and you can find anything you could want in these shops, from traditional and rustic to trendy and international. 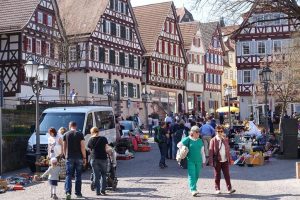 This university town features the best of what medieval German towns have to offer — a castle, half-timbered houses, cobblestone lanes, narrow by-ways, canals, elegant shops, and sidewalk cafes. You’ll definitely enjoy a stroll through the town, but if you have the time you might also consider taking a short cruise along the Neckar River on a Stocherkahn“, which is a boat navigated by a long wooden pole and only found in Tübingen.  This town is so beautiful that one picture just doesn’t capture it — two doesn’t either but I had to give it a try. 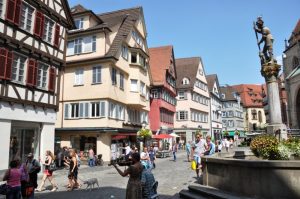 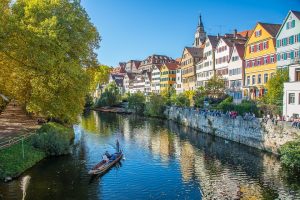