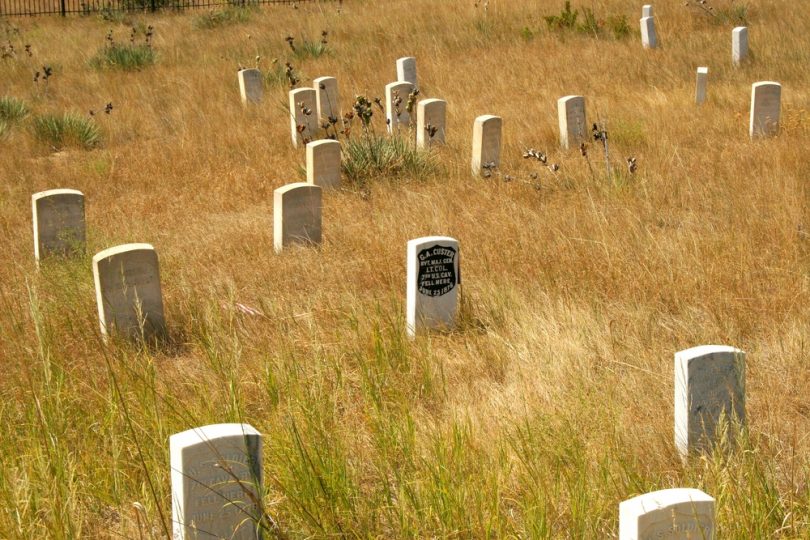 A mix of  national parks, the wild west, and artsy towns.

Sometimes it’s nice to get out in nature. Not all the time, mind you — I don’t have quite the appreciation for natural beauty as others might. When I’m exposed to such sites, I am thrilled, but it doesn’t last very long — after staring at the Grand Canyon for 15 to 20 minutes, I’m ready to hit the road. (I’ve been there, and it was a spectacular 15 minutes.)

Still, we decided to do a trip to the National Parks, because, well, I wasn’t doing anything special for a week or two, and I almost felt a responsibility to make the visit, and to do so sooner rather than later before the whole thing disappears in one big volcanic blast, seeing how Yellowstone is overdue for an eruption.

Given my propensities, just seeing the National Parks wouldn’t be enough. So I built in a few towns and other sites to spice things up a bit. Our total trip was about 1,600 miles, ending in Las Vegas — whenever I travel out west, I make that my final destination, because it suits my nature.

What follows is an itinerary that provides a nice mix of things that are not that accessible as individual destinations. For sure, you don’t have to go all the way to Vegas. You can cut the trip off at Jackson Hole, for a total of 1,000 miles. I know that sounds like a lot, but if you do it over 7 – 10 days, it’s not that much driving per day. Just a minor point: plan your trip for the summer, and no later than September. The roads can get a little dicey beginning in the fall, and you don’t want to end up like the Donner party.

Start your trip by staying in Deadwood, South Dakota, named after the dead trees found in its gulch. Now, you won’t find any 4 or 5 star hotels here, or in any other town within a 100 miles. So just bite the bullet and embrace the horror. This is definitely a jeans and sneakers excursion from start to finish. ​ 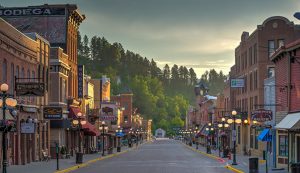 Deadwood is about 40 miles west of Rapid City, and is a good jumping off point if you fly into Rapid City, one of the closest airports. Deadwood’s claim to fame is tied to the Black Hills Gold Rush that swept through the area in 1876, attracting fortune-seekers and lots of interesting characters.

Here is where Madame Mustache, Dirty Em, Madam Dora DuFran and Madam Mollie Johnson set up business (that business being prostitution), where Calamity Jane lived, and where Wild Bill Hickok was shot in the back by Jack McCall after a card game gone bad. That event is replayed four times a day, if you’re interested. 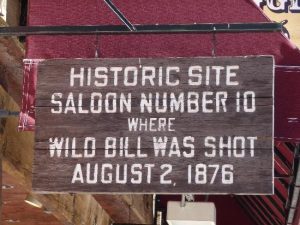 Deadwood is crowded with tourists, but it’s lots of fun, and it has retained much of its attitude and old west style of decadence.

For more information, go to  deadwood.com

From Deadwood you can hit The Badlands, roughly 100 miles to the east. This park is a drive thru, but there are plenty of places to stop and take in the incredible rock formations. For the more adventurous, there are 7 hiking trails, ranging in length from 0.75 to 10.0 miles, round-trip. If that’s not daring enough, you can do off the path back-country hiking for as far as you like, even do some camping. If you decide hiking is the way to go, the park has some recommendations — good hiking shoes, for example, and being able to read a map. One would think hikers would not have to be told such things, but you never know. And one more point: plan to lug about a gallon of water with you, and that’s per person per day. You won’t find any out there — it ain’t called the Badlands for nothing. 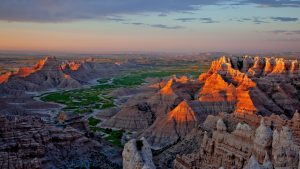 For more information, go to nps.gov

Next is Mount Rushmore. I know this monument is so iconic as to have become something of a cliche’, but I have to admit it’s pretty cool, even from a distance. If you’re interested in getting close, you can walk the Presidential Trail. It’s relatively short — about half a mile in length, but being its a mountain and therefore uphill, you have 422 steps to consider. Whether or not there’s a better view, I could not say, not having put in the effort.

For more information, go to nps.gov 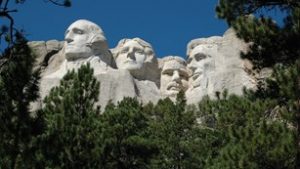 Head out the next day to the Little Bighorn Battleground, site of Custer’s Last Stand. It’s about 250 miles, but it’s more or less in the direction of your next destination. Besides, its one of the more emotionally charged monuments you will find, even if you’re not into history. There are two features that make this site so memorable. For one, markers are strewn throughout the field, indicating where individual Indians and U.S. cavalrymen met their fates — you can’t help but picture in your mind the pandemonium that took place as these men were fighting for their lives. The other is the park rangers. Their descriptions of the battle are so dramatic and passionate that you’ll find yourself getting caught up in the event.

​For more information, go to nps.gov 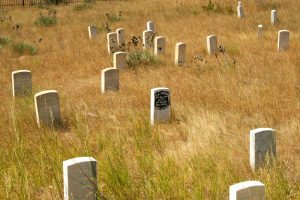 It’s now time to go to Yellowstone. We came by way of Billings and so took the Bear Tooth pass. A glance at the map below makes you realize this is not for the faint of heart. Its a 68 mile road that zig-zags its way up and over the mountains of Montana and Wyoming, and leads into Yellowstone National Park at its Northeast Entrance. You pick up this road just south of Red Lodge, at an elevation of 6400 feet and climb to almost 11,000 feet before coming down to earth, almost, at a mere 7500 feet, at the park’s entrance.

To say the Bear Tooth Pass is impressive is an understatement — in fact, it has its own website. I’ve driven it once, which is more than enough, and my wife tells me the views are spectacular. But not to worry, there are other roads you can take that are less gut-wrenching, such as Route 14, which heads west from Cody and runs along the Shoshone River — this one has spectacular views, and it’s flat.

Yellowstone is the world’s first national park, and it’s got just about everything nature can throw at you — colorful hot springs, steaming mud-pots, geysers, rivers, canyons with rivers, snow-capped mountains, lakes, forests, to say nothing of the wild life. And its all conveniently arranged around a loop parkway, with places to stop along the way to take in some of best panoramic views in the world, or to visit the key sites. Here’s a few images, but know that its impossible in this small amount of space to do justice to the grandeur and the variety of what Yellowstone has to offer. 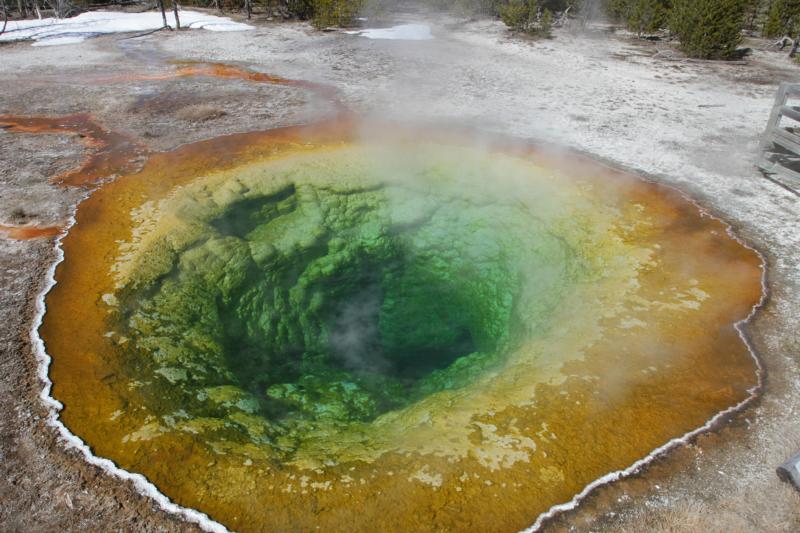 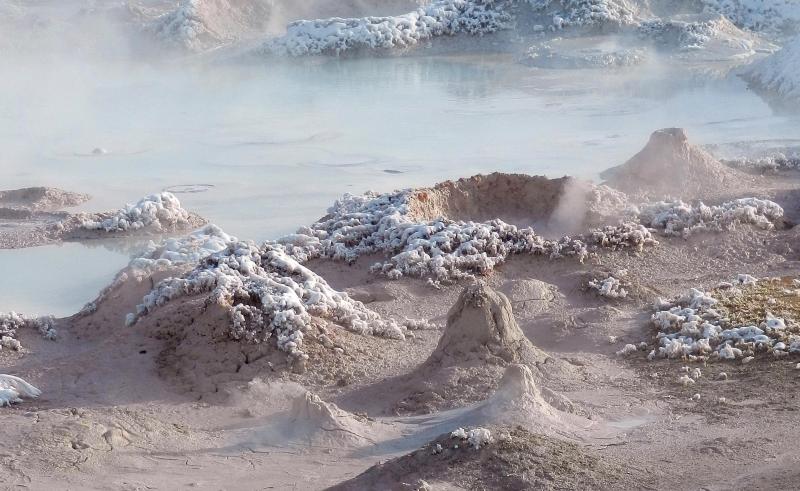 The final destination is Jackson Hole, which is both cowboy and bohemian. There’s 19th century Wild West architecture, boardwalks for sidewalks, saloons next to art galleries next to shops selling t-shirts and lariats next to high-fashion shops and upscale restaurants. There’s also an arch in the town square made of hundreds elk antlers, the significance of which I have no idea.

Now, some people think it’s a little too contrived (like Carmel, Ca. is a little too cute to be real), but all have to admit that Jackson Hole has tons of personality and is all about diversity, and that always makes for a an interesting day. You actually get caught up in the atmosphere. As an East Coast city boy, I have no affinity for anything western or cowboy-ish. I don’t get the whole boots and hat thing, and the only horses I care about have a number on their side and are ridden by very small men.

But while strolling through the streets my wife and I thought it would be great to get our picture taken in costume — I dressed as a gunslinger and she as a saloon lady, if you know what I mean. Ordinarily that is not something I would ever, ever, do, but it seemed to make all the sense in the world in Jackson Hole. 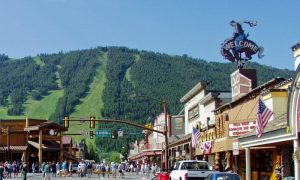 For more information, go to visitjacksonhole.com