In Part 1 we covered Millennials’ supposed shortcomings. But what about their strengths? I mentioned that a number of researchers report that Millennials are not much different than previous generations — if they’re different it probably has more to do with age and experience and less with generation. And some social scientists argue that Millennials may actually be better than previous generations, or at least better equipped to deal with modern times. Here’s what they include to their profile:

With a deep history of team sports and group playing on the internet, they’ve developed an affinity for teamsmanship. To Millennials, working in groups lets them pool their collective skills to solve problems, and at the same time connect with others who share their interests. So team work is part collaborative problem solving and part socializing.

As a side note, how does one reconcile the argument that Millennials are narcissistic and self-absorbed, with the idea that they’re team players? To be an effective team player, you have to sublimate the self to the group, and you have to be willing to accept criticism and rejection of your ideas. These are not things narcissists ever like to do. 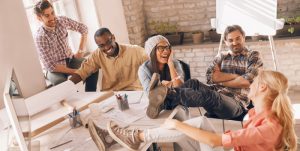