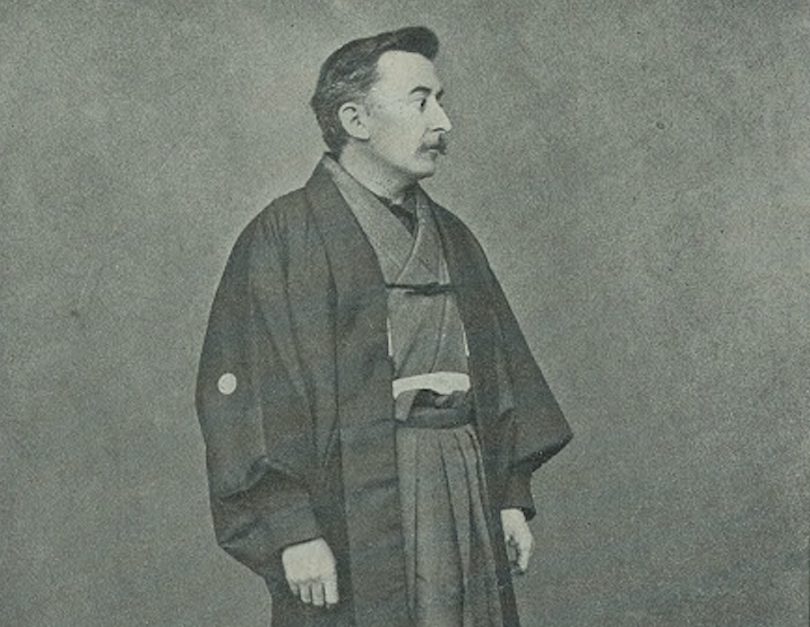 No bindings to social norms for Mr. Hearn

{Author’s note: There are several words in this article which may prove an annoyance to the genteel ear. Please be forewarned!}

Down through the ages they have always existed. These are the strange ones. Sometimes called ‘fiddlers’, at other times, non-conformists, Beatniks, Hippies, Wonderers, you name it. They have been here and each marches to his or her own drum.  Some of their stories have been spectacular, others not so much and still others just plain weird.

Lafcadio Hearn is such a man. For starters, he was born on the Greek island of  Lefkada, on June 27th 1850,  to a Greek Mother and an Anglo-Irish father. Lafcadio was brought to Ireland where his parents quickly disappeared. First through remarriage and then unfortunately through early death. In his teens he was sent to the charge of a widowed Great Aunt. It was here he got his first taste of the mystery and horror stories he would write on and off for the rest of his life.

When he reached the appropriate age he was sent to a boarding school, which became quite the fiasco. Through an accident where no one was put at fault, he lost the sight in one of his eyes, and shortly thereafter contracted myopia in the other. When financial difficulties forced him to leave school he was sent to a distant relative in Cincinnati, (USA) who promptly turned him out. He was penniless and homeless and still a teenager.

But Hearn ’s luck was about to change. He met Henry Watkin, an anarchist printer, who took a liking to the boy, and gave him small writing assignments which the youngster handled quite well.

Lafcadio worked his way up the ladder soon landing a job as an up and coming journalist. He worked for the Cincinnati Enquirer, where his articles soon  scandalized Cincinnati. The stories were so lurid in their detail that readers flocked to them and the once floundering newspaper was again quite popular and for now in the black.

In one of his stories he profiled Henrietta Wood, a freed slave who had been kidnapped and sold back to her original owner. Ms. Wood sued and two years after the article was published she won her case. She was awarded $2,500, an amount that still stands as the largest sum ever awarded to a slave as restitution for slavery.

(W. Caleb McDaniel wrote about this case in his Sweet Taste of Liberty, published in 2019 which was awarded the Pulitzer Prize for History.)

Hearn married his first wife in Cincinnati. Mattie had been born into slavery and thus the marriage was in violation of the anti-miscegenation laws. The Enquirer found out about it, and Hearn was quickly out of a job.

Undaunted and with a stroke of luck, he bounced around from Cincinnati to New Orleans, where he publishes a Creole Cook book with the first printed recipe for Gumbo. Then on to the West Indies, and finally to Japan, where he spent the rest of his life. He got to Japan as a journalist/reporter for Harper’s New Monthly Magazine.

Hearn loved the ‘Japanese way”, the respect and steady pace of Japanese life, and the mystery and ghost stories that were ever so popular. He began writing stories and short pieces on Japanese culture and folklore.

Upon realizing that his work at Harper’s New Monthly was getting in the way, he wrote a resignation letter to Henry Harper himself.  I quote:

“ You miserable beggarly buggerly cowardly rascally boorish brutal sons of bitches…please understand your resentment has for me less than the value of a bottled fart and your bank account less consequence than a wooden shithouse struck by lightening”.

You can take away that his resignation was accepted!

Concentrating on his writing without the rigors of daily journalism, he prospered and his short book Kwaidan is still looked upon as a classic in modern Japan. It was published a few years after his death by his Japanese wife. His books are once again gaining favor in the U.S. with several new translations about to appear in the very near future.

All this being said, Mr. Lafcadio Hearn is not only a brilliant writer, but a character history will regard as one of a kind, and perhaps that is a very good thing for all of us!