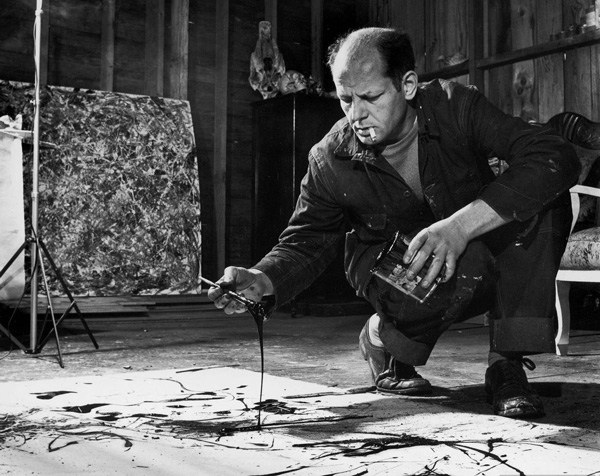 There’s never been a more controversial artist — greatly admired, loved, and hated, and vastly misunderstood. He was a hero to many, a villain to many more, and a person with a lust for life and adventure…an outsider. He was a leader of one of the most important American art movements who lived the life of a pauper and had his paintings hanging in galleries and museums all across the globe. All at once he was a husband, bum and genius. There is only one name to fill all these requirements, and that would be… Jackson Pollock.

How many times have you seen a photograph and said to yourself, I could do that. But you didn’t because you really couldn’t. It takes time, practice and years of false starts. Finally if you have the tenacity, talent and a bit of luck, you become the preverbal ‘overnight sensation’.

So it was when people saw the ‘drip paintings’ of  Jackson Pollock. Paint splattered across a canvas that looks as random as anything your grand daughter could do after school. That’s what the art world, with few exceptions thought. They were wrong. Very wrong.

His work hangs in museums around the world and his reputation is even grander than that. Pollock’s work has influenced every generation of young artists since the early 1950’s.

As a short bit of background, Paul Jackson Pollock was born on January 28, 1912, in Cody, Wyoming. He grew up in Arizona and California and in 1928 began to study painting at the Manual Arts High School, in Los Angeles. He moved to New York where he studied with Thomas Hart Benton.

Most of his adult life was spent in and around New York, with his painter wife Lee Krasner. The Pollocks bought a house on Long Island with enough space to create a studio for each of them. Lee was an accomplished artist and writer in her own right, but devoted most of her energy to seeing Jackson had everything he needed. (Which was not an easy task.)

Pollock was a difficult person to understand. On one side was this brilliant  artist, creating new styles and ideas in painting, and on the other side a loud and raucous drunk who had little time for anyone he thought uninteresting. (Which at times included everyone in his sphere!)

Most of the world knows Jackson Pollock as the artist who made drip painting. Long before these drip paintings, he painted figuratively, meaning his subject was clearly derived from real objects and so was representational. Many of these early canvasses still exist and are quite interesting to experience Pollock’s artistic evolution.

The 1940’s and 50’s was an era in American art when the avant-garde  world was moving west, away from Europe and to the United States, mostly to New York City. This small group of artists was becoming tired of Western European classicalism, both in painting and the other two dimensional arts. They were resisting the examples from Europe which had been up to this time unchallenged.

There was a feeling of great exploration, and for the artists themselves great excitement. The small group of men and women were redesigning the artistic center of the western world, and were creating what has become known as ‘abstract expressionism’. Pollock was the first significant painter to come from this school. Many would argue also its most important.

Pollock continued to evade the viewer’s search for any figurative elements in his new paintings. He abandoned titles and started numbering his works. He said, “look passively and try to receive what the painting has to offer and not bring a subject matter or preconceived idea of what they are to be looking for.” Lee Krasner, (his wife) said, “He used to give his pictures conventional titles … but now he simply numbers them. Numbers are neutral. They make people look at a picture for what it is — pure painting.”

As a painter Pollock had few, if any equals. Perhaps Bill DeKooning, or Grace Hartigan, if anyone. On the personal side he was a monster. An alcoholic who tried several times to rid himself of the demons, but in the end could not.

He was abusive, outrageous and often times impossible to be around. Most of those who had been close to him and even those, who for years praised his work, left him. The art critic Clem Greenberg who was Pollack’s champion, and furthered his career in more dismal times, could no longer be near him and could no longer write up his shows in the glowing fashion he had for years. As the circle grew smaller, Pollock grew darker.

Pollock died in an auto accident in 1956… He was drunk when it happened.