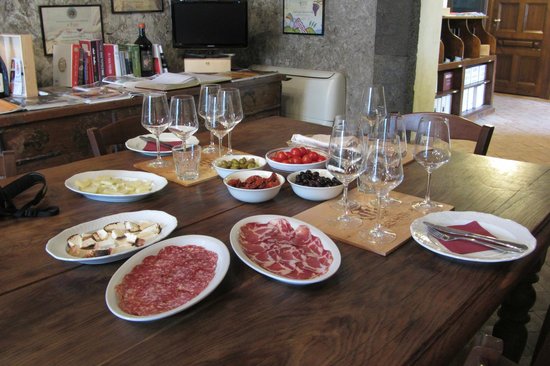 It’s about the wine, for sure, but this is Italy, so it’s also about food and talk.

A visit to an American winery can be enjoyable, but it usually doesn’t last very long. You stand at a bar/counter and select from a list the wines you want to try. The dude behind the counter puts a glass (sometimes plastic) in front of you and pours a few measured sips from a bottle that might have been opened yesterday. He or she will tell you something about the wines, but the description is often brief, and you move on until you’ve tried all that you’ve selected. Before you get a chance to settle in, it’s over, and you’re off to your next winery. The wines are often very good, especially in Napa, but you don’t get much beyond a few sips.

​Visiting a winery in Italy is different — food is an important component. There’s a reason — Italian wines tend to have higher acidity, so they don’t stand on their own as well as the better American or French wines. They’re meant to be consumed with a meal, and being that you’re in Italy, that’s not a bad thing. There’s also lots of conversation, about wine and anything else you care to talk about.