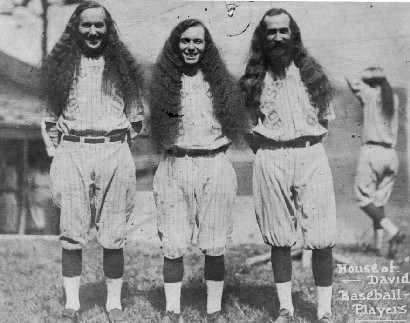 Welcome to the House of David

(Editor’s Note: With the delay in the baseball season, we thought something on the subject would help alleviate the pain.)

Let’s get back to baseball and why in this case it was more than just a game. Beside being one of the first teams of all white players to compete against teams with all black players, the House of David baseball team traveled the country playing teams of any description, as long as the competitions was good. They reached out to any team they could play where there was a dollar to be made.

The team was started around 1913 and by 1915 was playing any and all teams that came their way. By the late 1920s, needing more skilled players, the team began hiring professionals, the most notable being Satchel Paige, and Mordecai, ‘three finger’ Brown.

Most of the players grew their beards out to show respect towards the God of Israel, while others wore false beards. They were known for their skill, and played against some of the greatest teams in the country. The House of David played against Major League, Minor League, independent and Negro League teams. At one point, the community had three separate barnstorming teams touring the country, playing and evangelizing wherever they went.

The House of David teams were famous for inventing “pepper”, and various other baseball tricks, being given the name the Harlem Globetrotters of Baseball.

Let us not be naive — the House of David sent their teams out to make money. There were secondary reasons which included preaching their gospel and bringing tourists to see where they lived, but it was all tied to a support system for the community.

Certainly the hey day of the House was in the 1920’s through the 1940’s, although they continued in some form or another to play semi-professional baseball into the mid 1950’s. Probably the most famous of these barnstorming teams were the Black House of David, an all African-American Barn-storming team that played solely against teams of the Negro Leagues.

Baseball rumors make up a huge portion of the history and color of the game. There are stories about every famous player and what he did, didn’t do, what happened where and when and sometimes who they happened to.  One of the great rumors associated with the House of David Baseball Team is that they played games against not only the greats of the Negro and semi pro leagues, but perhaps played against the greatest baseball star of all time, the immortal Babe Ruth.

As far as this author can figure it may be true. Here are the details as I know them.

Babe “the Bambino” Ruth had several barnstorming teams when he wasn’t playing with the Yankees (or drinking , smoking and/or carousing).

And several of these teams played in an old park called McCormick Field in Asheville, North Carolina. There is a plaque on the wall of the stadium today that attests to this fact. McCormick Field was opened in 1924 and has been in continuous service to the present day. We know that House of David teams barnstormed up and down North Carolina during the 20’ and 30’s.

Any game with the ‘Babe’ and the House of David would certainly fill every seat in the house. (Approximately four thousand). Both sides were at it to make money, and this was a golden opportunity to do just that. There certainly could have been a game with the two sides squaring off for the almighty dollar.

That is as far as I can take the story. With further research the truth may come to light. But as a baseball fan and and an admirer of the Babe, and a curious follower of the House, I say let it sit.  Another rumor to delight baseball fans everywhere!

Now let’s sit back and watch our favorite teams, because with the coming of Major League Baseball, comes Spring, more stories, more rumors (and cold Beer!)