Is it rational to have opinions about scientific phenomena?

Over dinner one night, a friend mentioned that he believes global warming is a hoax. Now, normally I would have responded by bringing up the number of studies that support global warming, or review the specific findings uncovered by scientists. But I decided to go in a different direction, out of sheer frustration. It’s not that I disagreed with his opinion, although that’s certainly true. What really irked me was his audacity to have any opinion at all.

So I asked him, “Are you trained in the scientific method? Do you understand the concepts of internal and external validity as they relate to research design, or the concept of error as it applies to statistics? Do you have a background in geology, meteorology, oceanography, chemistry, biology, or any other field that studies climate change? Have you read any of the articles in peer reviewed journals? Do you know what a peer reviewed journal is? If you’re missing any of these, how did you formulate your opinion?”

As for me, I’m a social scientist and know the tools of my trade. But I’m only trained in the field of psychology, and have no background at all in the hard sciences. So, when physicists talk about string theory or dark matter, or medical researchers talk about using gold molecules to carry cancer killing drugs through the bloodstream, it doesn’t occur to me to question whether or not such things are real. How the hell would I know? I could take the perspective that I can’t observe them so they aren’t real, but I already tried that with the atom and people just laughed at me.

I don’t believe in atoms.

Whether or not there is such a thing as dark matter is an empirical question, meaning it’s existence can be tested, and either proved or disproved, and is not subject to opinions, especially from someone without knowledge of physics or astronomy. We can have on opinion about the existence of God, but not about testable hypotheses such as gravity, or dark matter, or global warming. Still, I’m at least in the position to evaluate the quality of the research methodology, but most people don’t have such backgrounds. And so there is little choice but to rely on the people who research such things to give the answers.

Now that’s not to say that every scientific study is sound. Some experiments are badly constructed, the measurement tools may be flawed, the researchers may have in-going biases or are just bad at their jobs, etc., and so the results are meaningless. But that’s not for the laymen to decide.

Thankfully, scientists are pretty good at policing themselves — otherwise we’d spend a lot of time wading through crackpot ideas. One way they do it is through peer-reviewed journals. When a study is completed, the results are published in an academic journal. But before that happens, there’s a hurdle to jump. Other scientists examine the details of the experiment — e.g., the design of the research, the measurement tools that were used, the statistics that were applied, and the conclusions that were drawn. If they deem the design is valid and the analysis is appropriate and accurate, then it’s published in the journal. If it doesn’t pass muster, it’s rejected. That’s the peer review process.

But even if the research is sound, that’s not the end of the issue — a single study just won’t cut it. In fact, that’s when things can heat up. Other scientists read the results and ask questions — they have a healthy skepticism and their goal is to support or refute these findings from their own research. They don’t mind getting into this fight because if their own research is more compelling, they build their personal reputations — scientists can be very competitive that way.

The scientific community will continue on this course until a large enough body of evidence is collected and convergence  is achieved, either supporting or refuting the findings of the original study. That’s essentially how we build scientific knowledge — through a consensus of research findings. No opinions, just facts — just to be clear, scientific consensus derives from reproduce-ability of results. There may be some conjecture when it comes to drawing conclusions, but these are highly informed opinions, and nonsensical ideas are laughed at.

Now, as a researcher, we can use statistics to test whether the 97.2% is significantly different from the remaining 2.8%. Significance is a key point in scientific experiments — it’s the standard that determines whether the difference between two percentages is real or just random noise. In the case of the global warming experiments, the difference is significant at the .0001 level of confidence, meaning that such percentages would occur just by chance once in 10,000 events. In other words, consensus was achieved. As a point of reference, scientists typically use a .05 level of confidence (i.e., p value) as a standard, and are happy, i.e., extremely confident, when they reach a .01 level.

Now, just to play devil’s advocate, let’s suppose there was a problem with some of the research. What if 30% of the 3901 experiments supporting man-made global warming were conducted by researchers who had an axe to grind, say, they don’t like the oil companies? Those experiments would be taken out of the support pile and put into the against pile. That would change the percentages to 68% for and 32% against man-made global warming. That’s still highly significant in favor of man-made global warming at the .01 level of confidence — consensus is maintained.

That’s enough with the numbers. Some of those who deny global warming attack it from the perspective of history. They don’t, or can’t, argue whether or not the climate is warming, but instead argue that the earth heats up and cools down periodically as a normal cycle. There is certainly evidence for that, but here’s something to consider.

Scientists argue that each cycle has a trigger. The earth doesn’t just warm up or cool down on its own, but certain conditions start the cycle. Here’s one example — a change in the Earth’s orbit around the sun occurs periodically, and that influences where solar radiation is received on the Earth’s surface. That orbital change is not strong enough on its own to cause large temperature changes, but it will trigger other events, such as ice melt in the arctic. With less white ice surface, less sunlight is reflected and more is absorbed by the Earth’s surface, causing temperatures to rise.

So, a cooling or warming cycle is initiated by natural triggers, and there’s not much we can do about that. But scientists propose that the conditions of heating or cooling can be amplified by the release of greenhouse gas emissions, such as carbon dioxide. So what should have been a minor change in temperature might turn out to be more extreme or last longer, due to things we humans do, making it a bigger problem than it should have been. This argument certainly seems reasonable to me, but how the hell would I know? 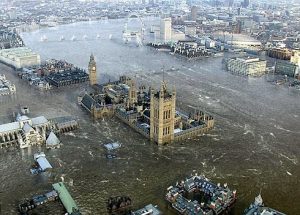 And that’s really the point, isn’t it? We’re not the experts and we don’t know. As laymen, we can only accept what scientists tell us and let them fight it out among themselves. When the dust clears, they’ll let us know — that’s how it’s always been done.

Unfortunately, in today’s world, opinions have come to play as big a role as scientific experiments when it comes to what we accept as facts. But we really have to ask ourselves, who should we believe — scientists who actually study this stuff, talking heads who have a political agenda, or some idiot congressman (Jim Inhofe) who brings a snowball from a chance snowstorm into the House of Representatives?

Having an opinion, or believing whatever we like about everything, well, it doesn’t get any more misinformed or more arrogant than that.

But that’s just my opinion.

And one final point — for those who believe that, even if global warming is real, there’s not much we can do about it, that misses an important point. New technology develops out of necessity. It’s only when we really need something will our researchers work en masse to come up with a solution. Who knows what new technologies will emerge once we all acknowledge this is a problem in need of their attention.