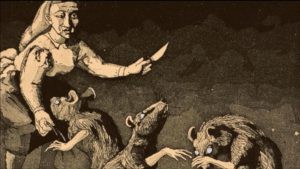 Keep your kids away from them.

Parents have mindlessly recited century’s old nursery rhymes to their kiddies for hundreds of years. They have a feel-good tone, and there’s evidence that nursery rhymes with music contribute to the development of a child’s cognitive, emotional, and language development. So we have that going or us.

But the stories they tell are sinister — plague, poverty, religious persecution, sex, murder, babies falling from trees, heads chopped off. Why are they so nasty? It’s proposed that, in times when criticizing royalty was a capital crime, nursery rhymes were a way to attack or ridicule and still maintain plausible deniability. They may also reflect the raunchy and tasteless (yet often funny) jokes that go around during or after crises — we still do that today.

Now, not all have horrible underpinnings. “Mary Had a Little Lamb” is innocent. Around 1830, little Mary Sawyer really had a pet lamb and really took it to school. As an adult, Mary recalled that a witness to the incident wrote a poem and gave it to her. “Jack Be Nimble” is also pretty tame. The rhyme came out around 1815, when, according to superstition, if you could hop over a candlestick without putting out the flame, you would have good luck.

But then there are others…

The 18th century rhyme/song is a tale of poverty. ‘Weasel’ is Cockney shorthand for ‘weasel and stoat’, i.e., a coat, and “pop” is slang for pawn. Put together, it’s about trading ones coat to get money for food. A second verse refers to going to a tavern and having to pawn a coat to get drinking money.

HERE WE GO ROUND THE MULBERRRY BUSH

England’s Wakefield prison in the 19th Century had a Mulberry tree in the courtyard, and the institution’s female prisoners walked around that tree for their daily exercise.

The American version of the 14th century rhyme has it as three men bathing in a tub. The attempt was to clean up the lyrics, which is a pretty strange way of going about it. The original is naughtier, but maybe less bizarre: “Hey, rub-a-dub, ho, rub-a-dub, three maids in a tub. And who do you think were there? The butcher, the baker, the candlestick maker, and all of them going to the fair.” In other words, it’s about respectable men ogling naked ladies.

This is about debt and criminal executions. The condemned were marched through London, past several churches with their bells tolling, to the location where they would be executed by beheading. It’s possible that in the waiting crowds were children and adults taunting the victims with this very tune.

Jack and Jill has two popular interpretations. King Charles I increased the taxes on alcohol by lowering the volume on a jack (½ pint) and gill (¼ pint) — “jack fell and jill came tumbling after.” People received less but were taxed the same amount.

The second is based on a local legend from the village of Kilmersdon. In the late 15th century, a couple — some say single and some say married but not to each other — had an affair which they carried on in secret by meeting up on a nearby hill. Things ended sadly, as Jack died from falling on a rock and Jill died during childbirth.

This one’s a protest on a wool tax that was introduced in 1275. Under Edward I’s decree, a third of the money from the wool went to the King, a third to the church, and the rest to the farmer, which probably meant he worked for nothing.

Is about the horrid working conditions for children in Victorian England, and may have been created to ridicule those forced into work houses. The words are heartless: “Seesaw Margery Daw, Jenny shall have a new master. She shall earn but a penny a day, because she can’t work any faster.”

It’s a story of religious persecution. During the reigns of Henry VIII and Oliver Cromwell, Catholic priests had to hide themselves inside their homes to say their Latin prayers. In the original, the narrator meets an old man “who wouldn’t say his prayers. So I took him by his left leg. And threw him down the stairs.” — left leg was a slang term for Catholics.

As horrible as the song is in it’s own right — cutting off tails with a carving knife — it’s actually more sinister than that. It’s about Queen Mary I of England, aka “Bloody Mary”, called that for the hundreds she had murdered for their Protestant beliefs. The three blind mice were Protestant bishops—Hugh Latimer, Nicholas Radley, and Thomas Cranmer—who refused to to renounce their religion, and so were burned at the stake.

Bloody Mary’s the star in another one. She’s contrary because of her desire to restore Roman Catholicism to England. As I mentioned, Mary engaged in a murder and torture spree of hundreds of Protestants. Her garden is a reference to graveyards piling up with martyrs, and “Silver bells” and “cockle shells” are believed to be torture devices.

The lullaby is about the son of King James II of England. It is widely believed that the actual child was stillborn, and another was smuggled into the birthing room and passed off as their own to ensure a Roman Catholic heir to the throne. The “wind” that knocks the baby’s cradle down (the cradle is the royal House of Stuart) is the Protestant movement to overthrow the king. So, this song is about a fake birth starting a civil war.

RING AROUND THE ROSIE

Many experts believe it’s about the Black Death or the Great Plague in London. The “rosie” is the ring-like rash that developed on the skin, and “posies” were flowers one carried, either in an attempt to mask the smell of decaying bodies in the streets, or as a way of protecting oneself from catching the disease. “We all fall down” needs no explaining.

All things considered, you might as well read a Stephen King novel as a bedtime story to your children. His books don’t pretend to be something they’re not, although they probably won’t conjure up many sweet dreams for your kiddies.