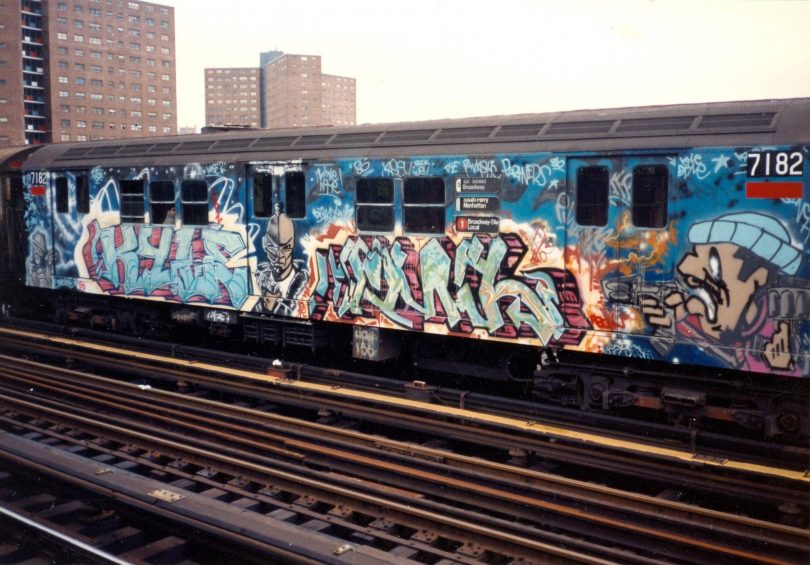 An art form and a force for social change.

Graffiti conjures up images of painted subway trains, building walls, steel storefronts, and any other large flat surfaces. They may be designs or primitive figures, or may spell out profane or cryptic messages. We also tend to think of it as vandalism — some bad seeds spoiling the beautiful urban backdrops for the rest of us.

The urge to record something on someone else’s property is as old as civilization. The word graffiti derives from the Italian, graffitato (scratched), referring to a time when folks etched their creations. The earliest examples date back to around 10,000 BCE, and they’ve been found in all corners of the world ever since.

It’s not just the angry, the disenfranchised, and the poor who have had something to say. Michelangelo and Raphael etched their names onto the Domus Aurea, the ruins of Nero’s palace, and Lord Byron did so on Poseidon’s temple in Greece; in America, settlers heading west carved inscriptions onto Signature Rock on the Oregon Trail.

The Romans were particularly prolific with graffiti. Some of it was just to sign in (“Satura was here on September 3rd.”) and of course there were the ubiquitous phallic symbols — these folks loved to draw a good-sized penis. But it wasn’t strictly for the sake profanity, although some it was; to the Romans, the male phallus was a symbol of fertility and good luck, and was used to direct patrons to brothels.

By the way, one well-known graffiti artist who goes by the name Wansky has put penis drawings to good use today in Manchester, England. He does it to point out to authorities dangerous potholes — these drawings tend to get everyone’s attention.

Back to the Romans. Graffiti was an act of self-expression. It was an important means of communication, and provided opportunities for all citizens of every class to make their voices heard, or rather, read. While much of it was lewd, still these writings have provided a window into their lives.

In fact, we’ve learned a lot about ancient societies from their graffiti. We know the literacy rates in ancient Rome were higher than expected, and we learned, through misspellings and grammatical errors, how words were pronounced. And we learned what they care about. Various kinds of businesses, including prostitutes, advertised their services, politicos shouted their slogans and promoted candidates (“I beg you to make C. Julius Polybiua aedile [a magistrate]. He makes good bread.”), romantics declared their love, and the average Joe (Julius?) gave his opinions on everything else. There were magic spells, jokes, insults, and boastings (“Celadus the Thracier makes the girls moan!” — found on a gladiators’ barrack).

In the ancient world, graffiti wasn’t regarded as vandalism as it has been in modern times. But that’s changing — nowadays it’s considered an expression of urban street culture. And the better artists, going under the monikers of Banksy, Brett Cook, Gunk, Eclair Bandersnatch, Miss Van, Eddie Colla, have achieved fame (noteriety?) for the quality of their works and their ability to express their thoughts on social and political issues. Here are some examples of their work…

Then you have towns that have entirely embraced their graffiti, and clearly regard it as an art form. Here are a few pieces from Olinda, Brazil…

My favorite is Orgosolo, in Sardinia. This hill town had a reputation for banditry and kidnapping up until a few decades ago, but now it’s famous for it’s murals. You’ll come across 150 of these, painted in the 1960’s and 1970’s by local artists, covering virtually all the outer walls of homes and even the rocks around the town. Many have social or political themes, and all are artistic expressions to be enjoyed by all.

As with any other “club”, graffiti artists have their own lingo to describe different types and styles of work. Here are a few of the more common words and phrases…

However you might think of graffiti, we all have to admit that it’s a lot more interesting that staring a blank wall.