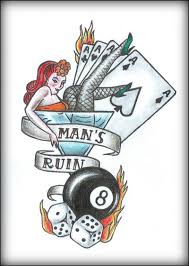 An ancient tribal art is today’s form of self-expression

When we Boomers were kids, if you had a tattoo it meant you were a tough guy, a sailor or a side show freak. Today every blonde teenage girl from suburbia has one (or more).

Where did this fetish come from? What is so glorious about ink that half the world has become a coloring book? A short history may provide some answers.

The word tattoo comes from the Tahitian “tatu” which means “to mark something.” It is claimed that tattooing has existed since 12,000 BC. Tattoos are found in every culture in the known world. Many of the recently discovered mummies have tattooed skin still in tact. Polynesian tattooing has a remarkably colorful (and painful) history.

For this short piece let’s center our attention in the Unites States. As I said, until very recently if you had a tattoo you were ‘outside the law, or at least the norm”. Tattooing in this country can be traced back to the late 18th and early nineteenth centuries. They were used among other things to identify sailors. Often the paperwork for these men were vague in their physical description, so the tattoo became a identifiable mark.

From the early part of the 19th century the side shows all boasted “tattooed Ladies” as an oddity that usually cost a nickel to see. Maud Stevens Wagner was one: 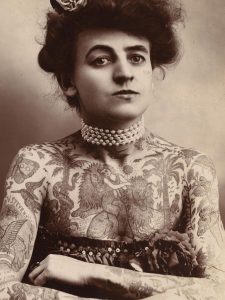 Through the years there have been many famous tattoos as well as tattoo artists. One of my favorites  ‘tats’ is “Man’s Ruin”.  Drink, women and gambling, the unholy trio.

Man of the early artists were located in Brooklyn’s Coney Island or The Bowery in Manhattan. The Moskowitz clan,  “Lew The Jew” Kurzman, and a host of others who tattooed for as little as a quarter an image simply to pay their bills are today looked upon as legendary.

“Lew the Jew” Kurzman at work. 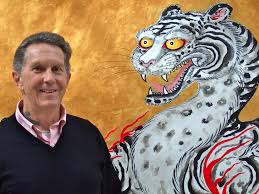 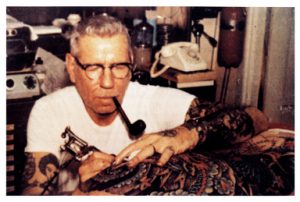 Tattooing was first done with needles and a mallet and later, with the advent of the electric needle, tattooing became less painful, more artistic, more varied and grew geometrically to something more than a tribal mark.

By the late 1970’s and 80’s art school students were making ten times more for a large tattoo than they could get for a painting. Styles also changed — many American tattoo artists had incorporated Japanese and Eastern imagery in their tattoos.

With the new wave of artists, tattooing became more of a picture than a simple image or marking. The tattoo of “mom” was replaced by mom’s portrait. Many people collect tattoos of their family and friends. Other go for celebrities.

Still, in the eyes of many younger people, the stigma of “outlaw” remained. This was fostered by places like New York City where tattooing was illegal from 1961 until 1997.  By the turn of the 21st century tattooing had achieved universal acceptance. Everyone and his baby sister had ink on their body. Some of it quite beautiful and some of it…not so much. It might be fun to get Yosemite Sam on your bum when drunk at Mardi Gras, but you will have to live with that for the next 60 years, so think before you ink. 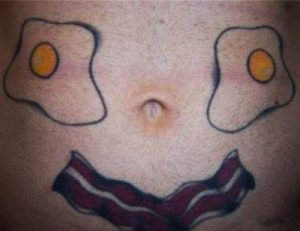 Although a ‘tat’ makes you feel like an individual, now that they are so prominent, not having one is unique. The thrill is gone. Tattoos are now everywhere on every one. Even the art of facial moko from the Maori has found its place into modern culture. Once a true taboo to any one not Maori, now like almost everything else in our culture, they have gone mainstream. (Sadly for us old school guys). 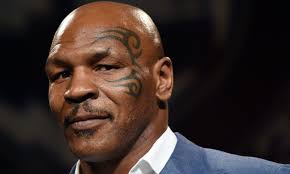 So what has made this ancient art so popular?  I posit two main reasons. First, it is still a ritual, with pain and blood being two constituents. You will feel it and it will bleed. This is a major part of Ritual, “passing through” to a new and better equilibrium. Second, in this day of social media, and digital bathrooms, everyone still wants to be unique and make a statement. Every tattoo is unique. It is so because the canvas it is placed upon is unique. The style may have changed, the people who are getting inked is certainly much wider in scope, but at its core a tattoo says, “this is who I am”…deal with it.

From the profane to the beautiful, from the tearful to the joyous, tattooing is still around and growing stronger every year. As of 2017, the tattoo industry claims to be worth well over 50 billion dollars.

For my next one, I am waiting for the 3 dimensional hologram tattoo…and please don’t tell me they are available now!!!