On January 11, refugees and wounded soldiers were loaded on a 26 car train, trying to flee the advance of the German army. At about 1 o’clock in the morning, as the train descended a steep bank near the Ciurea Station, the brakes failed. The engineers tried everything they could to slow the train — throwing the engine in reverse and using sanding equipment designed to increase the grip of the wheels. But the train continued to gain speed, reaching about 60 miles per hour.

To avoid a collision with a second train at the bottom of the incline, the engineer switched the train onto a loop. However, because of the high speed and sharp angle, only the locomotive and one car were able to negotiate the curve, and all but two of the remaining 24 cars derailed. At least one of the derailed cars collided with some fuel tanks, triggering an explosion and a huge fire.

Although the final toll is uncertain, most sources at the time indicated there were between 800 and 1,000 killed in this tragedy. 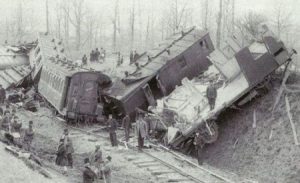 On December 12, almost 1,000 French soldiers were returning home from the Italian front for Christmas. Due to a shortage of locomotives, the local commanding officer decided to couple two trains together, totaling 19 cars and pulled by a single engine. The driver at first refused because the weight of the train was about 4 times the safety limit, but was forced to at gunpoint. Only three of the 19 cars had automatic air brakes; the rest were hand braked or had no independent braking system.

After departing from the Modane station and descending into the valley from the French side of the Alps, the driver attempted to apply the brakes. But because of the heavy load, the brakes failed and the train continued to gather speed, reaching about 85 miles per hour. The brakes then overheated, causing fires to break out under the cars. After running about 4 miles, the first car derailed and the following cars smashed into one another. The resulting pile-up of wooden cars quickly caught fire, triggered by the overheated brakes and by candles that were used due to defective electric lighting. The fire was also fed by grenades and other explosives carried by the soldiers.

Of the 1000 passengers, the death toll was 675 and a further 150 were injured. Because of the intensity of the fire, only 425 bodies pulled from the wreckage could be identified.

A trial was conducted for six employees of the railway, but they were all acquitted. 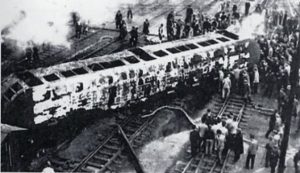 On December 26, 2004, a tsunami was produced from a sea-floor earthquake northwest of Sumatra. As fate would have it, a train running the coastal line, overloaded with passengers, passed within 217 yards of the shore when the first wave came on them. That had enough force to stop the train, but did not cause major destruction or loss of life.

Believing the train was a safe haven, passengers and local residents stayed inside the cars or climbed on top of them. A second, much larger wave then struck, ripping the train off its tracks and rolling the cars. Passengers inside the cars were trapped and quickly drowned, and many of those outside the train were crushed by the rolling cars or swept out to sea. Officials estimated the second wave to be about 25 feet above sea level and 6 to 9 feet higher than the top of the train

According to the Sri Lankan authorities, only about 150 people on the train survived. The estimated death toll was at least 1,700, and possibly as high as 2,000, although only about 900 bodies were recovered. 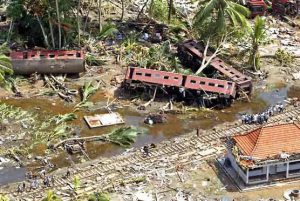 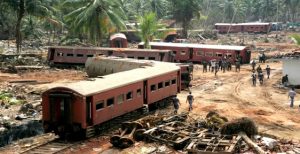 Page 7 of 7 Previous Page Next Page