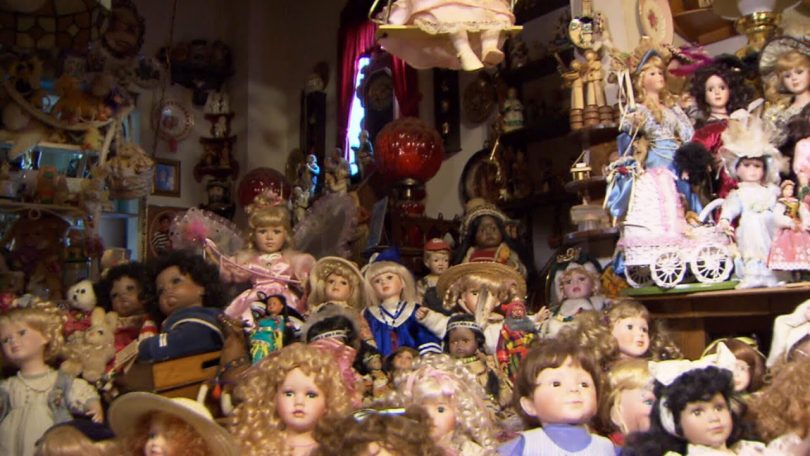 This is a look at dolls. No not the kind Frank Sinatra sang about. The kind my younger sister had all over her bed, on her bookshelves and even sitting around a small wooden table with a miniature tea service set up for their afternoon tea. Most young girls and perhaps some young boys played with and enjoyed dolls. They were performers in an imaginary world for hundreds of years all across the globe. It was said that Barbie was more popular than Doris Day.

When we look at the history of these play-toys it varies almost as much as the actual dolls themselves. Most serious collectors place the origin of dolls and doll collecting back to Ancient Egypt, or Greece and then a bit later to Rome. These early figures were both rudimentary playthings as well as elaborate art. There are examples of dolls which still exist today, many of which are over 4,000 years old. The world’s oldest doll is a  4,500-year-old statue with almond-shaped eyes and bushy eyebrows. It was found in a Bronze age child’s grave in 2017.

Modern doll manufacturing has its roots in Germany, in the 15th century. Until the mid 18th Century dolls were known as “toy babies”. Legend has it  that the name ‘doll’ was short for Dorothy, perhaps the daughter of a maker, and began to be used somewhere in the late 18th Century.

George Pemberton Clarke is responsible for a mechanical crawling doll from 1871. (Not only does the original doll still exist, but the patent tag is still attached. For the curious, it is # 118,435). This was a new innovation and was the beginning of dolls that did more than just look pretty.

By the 1940’s dolls were big business. Even more were sold in the 50’s and the pace continued into the 1970’s and beyond. The mid-eighties was when collecting became a sport. We collected everything, trying to bring back our youth, trying to reinvent a friendly and safe future, and quite frankly it was a good way to make a buck.

‘American Girl is an American line of 18-inch dolls released in 1986 by Pleasant Company. The dolls portray eight- to twelve-year-old girls of a variety of ethnicities, faiths, and social classes from different time periods throughout history.’

These dolls became, and still are all the rage. They come in all colors and costumes. The bad part is they aren’t cheap, so they exclude many youngsters, but the good part is it’s wonderful that little kids of color can now see a doll that looks like they do.

As mentioned above, American Girl dolls are quite fashionable and a bit on the expensive side. Most sell for around $100-$150, but many climb much higher than that. However, that is not to say there are not many dolls which today sell for thousands and even tens of thousands of dollars. The most expensive doll we could find was a rare German Kämmer & Reinhardt life-like doll which sold for $400,000 at a Bonhams, Knightsbridge auction.  (Bet all you women wished you had saved your childhood dolls, just like you guys wish your mother didn’t throw out your Mickey Mantle rookie cards!)

But alas, there are still many dolls for the average family to purchase, with full sets of clothing and accessories. Many of these smaller dolls can be had for under $20, and will give just as much pleasure as their regal sisters and brothers There are boy dolls, girl dolls, gay dolls, trans dolls and any doll your heart desires.

In this world of constant madness isn’t it wonderful there are still beautiful places to escape!