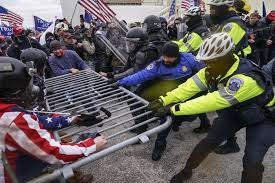 We are not as peace-loving as we pretend to be.

The violence on Capitol Hill Wednesday caused most observers to opine that this isn’t who we are as Americans. President-elect Joe Biden said “to storm the Capitol, threatening the safety of duly elected officials (is) not protest. It’s insurrection. The scenes of violence do not represent who we are”, Biden added.

After two and a half centuries of American exceptionalism, we still believe that we are the children of a nonviolent heritage. But if you picked any one of America’s 25 decades you’d be hard pressed to find one that wasn’t shaped in the violence of change.

The idea of throwing a ship-load of tea into a harbor is benign in 2021 but it was nation shaking and shaping on December 16, 1773. The violence that we poured on generations of black slaves and indentured servants flew in the face of our national declaration that all men are created equal.

In the first half of the 20th Century we beat workers with bats and even shot others who had the temerity to ask for job security and a livable wage.

In the middle of the 20th Century we used atomic force to evaporate thousands of Japanese citizens, one so quickly that his shadow was seared into a wall but the life and body were gone.

Even our national anthem celebrates a piece of cloth that survived a night of bombs bursting in air instead of celebrating the people, places and spacious skies that make America beautiful.

They were domestic terrorists who invaded the citadel of democracy on Capitol Hill Wednesday. Just as it was a domestic terrorist who blew up a Federal Building in Oklahoma City in 1995 killing 168 men, women and children, and injuring more than 680 others.

Thursday morning, some of the recent recipients of America’s political scorn fired back, perhaps, with a measure of glee. Venezuela and Turkey joined the global chorus. Turkish authorities even recommended that its citizens living in America stay away from crowded places for their own safety. After Wednesday maybe America has no moral authority to scold anyone about their domestic affairs.

Listening to the mob chant “USA! USA! USA!” in the halls of the Capitol made me think of their destiny should they have tried such violence in any of several other nations in the world. Four died in Wednesday’s insurrection but imagine the blood bath if terrorists had invaded the Kremlin in Moscow or the seats of power in Saudi Arabia or China.

The invasion leaves many questions. Why wasn’t law enforcement more prepared when the Stop the Steal rally was known for weeks? Did we think that potential violence from a group of largely white demonstrators is different than demonstrators who were in Washington, DC last summer raising the issue that Black Lives Matter?

Should reactionary law and order violence be different for a white mob than a black one? Should the President, his family and legal representatives be held accountable for launching a shouting mob of defiant chaos toward the seat of American political power? What about those who denied the DC mayor who requested the National Guard be on standby during the rally?

We’ll never get beyond the reality of American violence that’s wired into the national genome until we deal with the nonviolent myth socialized into American children in every America history class.