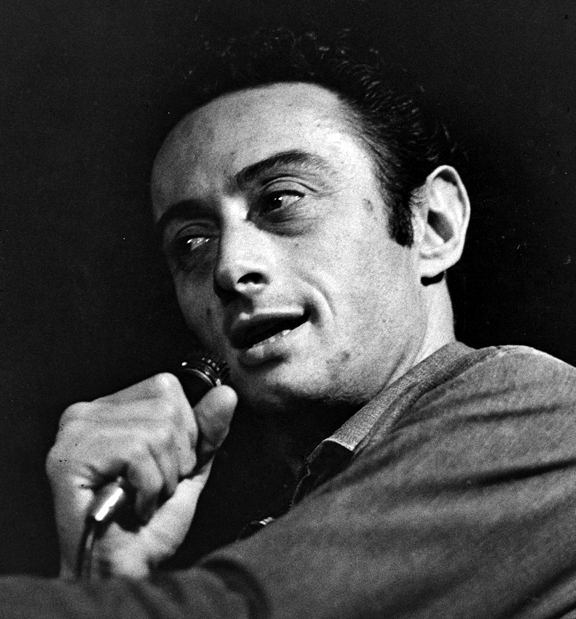 The one who started it all

There is a fine line between heritage and lineage. Both are important, one no more than the other. Lineage is earned, while heritage is given. In both cases we always look for the progenitor, the original from which all others descend.

I have a good friend who is a fifth generation baker. His great great grandfather, and then on down the line, were all bakers. He told me once that by showing his Union card he can get a “piece of bread anywhere in the civilized world”, and will never go hungry. Maybe. That was his lineage. The Great Great Grandfather was the heritage that all the rest inherited.

When we look to entertainment there is always a progenitor — take your pick of a handful of names. When it comes to standup social satire, the progenitor is quite clear. He is Lenny Bruce.

Lenny Bruce is godfather to Richard Pryor, then to George Carlin and  finally to Dave Chappelle. All give/have given big respect to Lenny Bruce as the ’One’.

Born Leonard Alfred Schneider on October 13, 1925 in Mineola, New York,  Lenny grew up in a typical immigrant neighborhood strapped by the Great Depression. His childhood was not abnormal, nor did he seem to be anything but a social commentator since junior high school, when he was known for his wise cracks, and semi off color jibes. That was the old Leonard Alfred.

By the time he stepped onto a professional stage his new personality and new moniker was Lenny Bruce.

Lenny came from a typical New York immigrant Jewish family and many of his great sketches were derived from his childhood. He was by his own account an outsider, not very good at boyhood sports. His inwardness and isolation spawned an artist intent on searching for meaning in the universe. For Lenny it wasn’t a great philosophical breakthrough, just a chance to get up in front of people and inform them all of what they were missing by not being Lenny Bruce.

As a comedian and social commentator Lenny used satire, a weapon as old as Jonathan Swift. Often times his routines were riddled with ‘blue’ language and a comic assault on any structure he felt was not living up to his current point of view. These included, but were certainly not limited to, the Church, the Synagogue, homophobia, the police, the schools, and our own differences which were derided rather than praised.

In his stand up nothing was sacred and his outlandish remarks and constant protestations led to him losing his cabaret card, being hassled by the police, taking and eventually overdosing on heroin and most importantly losing the great love of his life: His wife Honey, a beautiful redheaded striper who left him, and broke his heart.

Pain and misery, high times, big paydays, fights with the ’man’, Cadillacs, low times and sadness, Lenny managed to channel all of it into his stand up.

Lenny Bruce was the first performer who thought of himself as an artist, not merely a comic. His idea was to incorporate satirical glimpses of the problems we all shared and bring them out in an eye-opening hilarious way. His shows could be made of several routines, or they could stay with one topic. It only mattered to Lenny to investigate everything he felt was important on that day and nothing more.

If you listen closely to Richard Pryor, and George Carlin, and today watch Dave Chapelle, you will see instantly what great art and thought provoking humor really is…

Take a look and listen to three pieces of Lenny Bruce.

The first is called fake news, and although it is over sixty years old it plays perfectly today in 2021

The second is a bit of comedic truth, titled  the difference between men and women

And the last one is a lovely little song, called all alone.