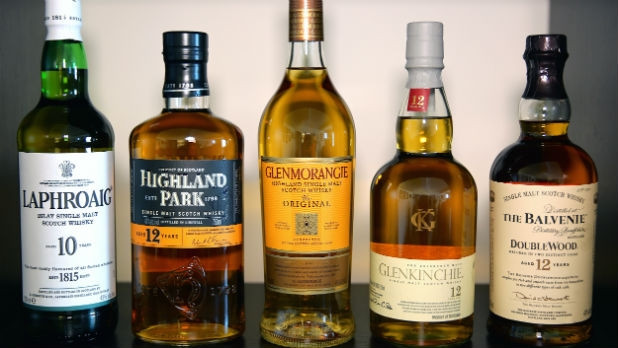 How much would you pay for the world’s classiest beverage?

“To Friar John Cor, by order of the King, to make Aqua Vitae, VIII bolls of malt.”

That’s from the Exchequer Rolls in 1494, the first mention of Scotch production. That was enough malt to make about 1500 bottles for Scotland’s royal household. It’s warm and calming sensation gave Scotch a medicinal aura, and so it was used to treat all kinds of ailments. Some still believe that today, but nobody believes you drink it only for a cure.

Scotch is regarded as one of the classiest beverages you can buy and its production is a complicated business. All for good reason, as good scotch can command some healthy prices. Before we get into that, we should go through some facts. Aficionados certainly know all this stuff, but for the rest of us:

“They say some of my stars drink whiskey, but I have found that ones who drink milkshakes don’t win many ball games.”

Here are some general guidelines as to the proper way to drink Scotch:

The rest of the way we’ll focus on single malt Scotches — they have a more pronounced flavor and bouquet, and so are the classiest segment of the classiest beverage. Within this segment, the individual brands can taste very different. In large part, it’s because of the water. But it’s also due to the quality of the barrel, the climate of the region, and the peat that’s used in kilns to dry the barley and create malt.

And, of course, aging. Age on a bottle reflects the age of the youngest Scotch in the product. If the age isn’t stated on the label, then it’s 3 years old. Note that aging stops once the Scotch is bottled. So if you think that a 12 year old Scotch you bought in 2000 is 29 years old, it’s not.

The longer the Scotch is kept in the barrel, the better the quality. Aging in oak barrels is important because the characteristics of the wood give the whiskey its distinct taste. With more time, these characteristics continue to be passed on and mellow the flavor.

However, there’s a point where Scotch can be aged too long and won’t taste as good. That’s when the wood overpowers the whiskey, and that’s somewhere between 20 and 40 years. Something to keep in mind when you’re trying to decide whether or not to drop a few hundred or thousand bucks on a 50 year old bottle. ​

Now, on to price. You’d be amazed at what some people have shelled out for a single malt Scotch. Let’s begin with the absolutely most expensive bottles — notice that many of these are aged 50 years or more. So you can’t even be sure that you’ll enjoy them. But then again, at these prices, who would drink them?

Note that our list only includes single malts from Scotland — there was a bottle from Japan (Yamazaki 50 Year Old) that sold for $133,999, but it’s not a single malt Scotch because it wasn’t made in Scotland.

The most expensive Scotch ever was sold at a 2014 Sotheby’s auction in Hong Kong. Just the bottle alone took over 50 hours to make and required 17 artisans. To make the Scotch, seven out of about 200,000 barrels were selected, with the age ranging from 25-75 years.

This 64 year old scotch was bottled to celebrate the 150th birthday of René Lalique, who founded one of the world’s most respected crystal production houses. The decantur, with the scotch, was auctioned through Sotheby’s in 2010.

Named after the oldest person in Scotland, this scotch was sold at a charity auction in New York in March of 2012. There were only 11 ever made and they were all sold in private auctions.

Unlike the three previous Scotches that you can only buy at auctions, this scotch can actually be purchased right now, and on line. It’s in stock and next day delivery is even available outside the UK. But keep in mind that supplies are limited — only 24 bottles were produced.

This is the first from the Macallan Fine and Rare line, hand-bottled at the distillery. A bottle sold at auction in 2007 for $54,000, but another sold for $75,000 in 2005. It is purported that this particular Macallan Scotch can age for 50 years because of the quality of the malt, and that claim is not made for any of the others.

This scotch was born the year of King George VI’s coronation. There are only about 60 bottles that haven’t been consumed, and all have been sold at auction. The highest price was achieved in 2012.

This bottle of Scotch was named in honor of the founder of Dalmore, Alexander Matheson. It was reported that it sold at auction to an anonymous buyer, who then drank it with his friends.

We could go on, but how much insanity can one take? But… just in case you’re up to it, here’s a few that are in the second tier, not being able to break through the $50,000 mark…

Now for some reality, there are a number of scotches that are very highly rated and actually priced reasonably, and by that I mean not cheap but you won’t need a mortgage. As for me, I’m a Glenlivet 12 Years Old fan, and that sells for about $50, so some of these prices are still more than I’m willing to pay for a beverage. But you may have more a discerning taste than I do (in fact, I’m sure you do.)

Here they are, arranged in descending order by price:

Here’s mud in your eye.