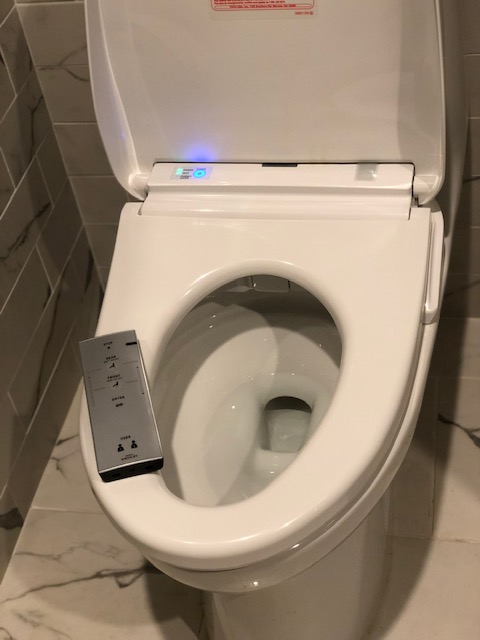 Recently an article in the New Yorker magazine spoke about Pompeii and the continuing excavation. There was mention of ancient toilets. Normally I would skip through this and not even blink, although when I returned from a short vacation with my wife, that toilet became an issue I wondered about. Read on.

Like most of us, I have a small circle of good friends. When we convene we talk about kids, crypto currency, sports and vacations. Most of my friends vacation in places like Vienna, St Moritz, Martinique, even Las Vegas.

Me, I only vacation in places where even the toilets have their own remote controls!

My wife decided we needed a vacation and she also decided where we would go and when. She made the plans, told me about them, and told me to pack what I think I would need for a 6 day stay. And, she told me not to over pack. As you can see my wife is truly a ‘drunkards dream’, one of those people who thinks of everything, does everything, then wonders what she missed. I did as I was told.

As we departed, everything seemed normal. I locked the house, drove to the airport, deplaned at the opposite airport, rented a car which she had thoughtfully reserved and drove to our apartment. (Far be it for her to stay in a single room for longer than one night!) We unpacked with the assistance of a young man who spoke constantly about nothing and seemed to compliment himself on his brilliance. I tipped him, and thankfully he left.

After twenty minutes of sheer frustration I called the concierge who said a “fellow” is on the way up.  This ‘fellow‘ they sent was older than middle-age, wore a green workers suit and carried a doctor’s bag. He looked at me, probably wondering if I couldn’t even put the lights on, how in hell could I afford this luxury joint. (He hadn’t met my wife yet!)

He showed us twice how to put the lights on and off. Showed us how to raise and lower the scrim and the solid drape on the bedroom suite window with the touch of several colored buttons. He went over it again, and after much practice we had it down. Almost.

Next I went to the bathroom where I encountered his Highness, the toilet. Or shall I say the “throne, the commode, the lav”…you get the picture.

Here he sat with lights flickering, a humming noise and a chrome remote controller on his lap. As I walked toward him the blue light overtook the red light and the humming seemed to break out into melody.

I am not a timid man, nor an overly religious man, but at that moment I thanked the powers that be that I was not a woman, who had to actually sit down on this thing. Standing in His proximity was frightening enough.

However, what would happen the next morning now pervaded my thoughts to the point that I thought perhaps I should fast these 6 days and have no further business with Him. “Silly” I thought and dove into my Vegan Pizza and cold beer. Both were tasty, but would they be my ticket to  commode slavery and forever blinking lights and strange commands?

After my darling wife went to bed I quietly slipped into His room and grabbed the remote. It said things like “ vibrate, heat, cool, shake, and warm. Standing at distance I tested vibrate. It did. Then I pressed shake, it did, hum and it did that as well. (Don’t really understand that one) That was when I became enamored of my new power. I was now king of my own domain. Making my commode do what I wished, anytime, under my trusty remote control.

As I slipped back into our bed un-noticed, the thought hit me — it did not have a command for “Flush”.

Was that an oversight, did it do certain things telepathically? For the rest of the vacation I used the men’s room in the lobby.

The trip was a great success.