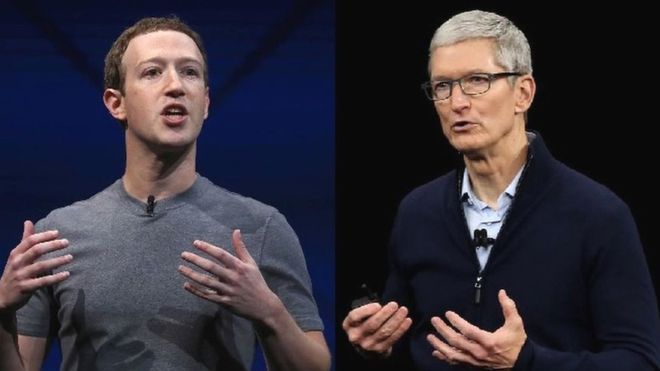 Two tech moguls will battle it out over your privacy rights.

Set your DVRs for Friday, April 6th, 2018 at 8pm ET, MSNBC.  That’s when we get a deep dive into Apple CEO Tim Cook during the Recode Special, Revolution: Apple Changing the World.

MSNBC is promoting it heavily. But darts are already flying in Silicon Valley. In the interview, Cook takes some shots at Facebook founder, Chairman and CEO Mark Zuckerberg.  Now Zuckerberg’s response is trending in Social Media. Where else for Zuckerberg?

First, understand that Recode (formerly Re/code) is a technology news website that focuses on the business of Silicon Valley.

Should we care about two titans taking aim at each other through a national cable network?  EXCEPT, both run two of the largest megabusinesses in the world and both have been accused of playing fast and loose with the personal data of the billions who use their products.  In short, we should pay attention to this.

In 2016, Cook had a stare down with privacy zealots against the FBI. Federal agents wanted Apple’s help opening an encrypted iPhone belonging to one of the shooters in the San Bernardino terrorist attack. On the other side, Facebook and Zuckerberg are starring at a Congressional inquiry over the private data of users like you and me. The government also wants to know more about Facebook’s footsy with fake news and Russian mischief during the 2016 Presidential election campaign. Frankly, so should you and I.

Isn’t it nice to be the play toys in billionaire playpens? Maybe this will give us a peak beyond the green curtain at the arrogance and entitlement of leviathans like Cook and Zuckerberg.