More than you want to pay, if FCC Director Ajit Pai has his way.

What if you wanted to follow what’s happening in Washington without free access to the Internet? The rules that keep Internet content open to all were thrown out by the Federal Communications Commission last December. If the FCC has its way, you could be faced with paying for access to websites like CNN, the NY Times and FOX News. There are people in Congress who are fighting to keep access to Internet content free to all like it is now. It’s called Net Neutrality.

The U.S. Senate voted to reverse the Federal Communications Commission’s repeal of net neutrality rules on May 16th. All members of the Democratic caucus and three Republicans voted in favor of maintaining Net Neutrality rules that were put in place in 2015. Last December the FCC voted to overturn those 2015 rules and deregulate the broadband industry. That opened the door for many things, including fees to access content on the Internet that’s now accessed free of charge. Deregulation also opened the door for service providers to pick and choose the sites they wanted to give full access at full speed. That’s what’s possible if Net Neutrality is killed.

The issue is now in the House where Democrats are trying to push through a vote on repealing the FCC’s December deregulation and, hopefully, keep Net Neutrality in place. It’s called a discharge petition. It needs 218 signatures to force a House vote on the same Net Neutrality bill passed in the Senate. So far, the petition has signatures from 172 representatives, all Democrats. That number hasn’t changed in two weeks.

Until January, Republicans have a 235-193 majority in the House. You can monitor which House members have or haven’t signed the Open Internet Order petition at this page. It’s maintained by Net Neutrality advocacy group Fight for the Future.

More than 20 states are fighting to maintain Net Neutrality. New York, California and the District of Columbia have joined in that battle.  Montana is also in the battle although it’s not shown on the map below.  Generally, they’re barring state agencies from doing business with Internet service providers that violate Net Neutrality and act to limit customer access to content through fees or regulating the speed that content would be made available to end users. 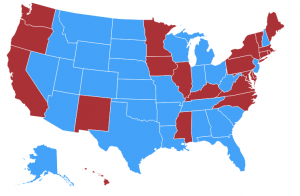 Lobbying groups representing all the major cable companies, telecoms, and mobile carriers are flooding the halls of Congress. If it’s not clear, here are some of the issues:

Service providers like AT&T are blocking things like Skype and other voice applications that compete against AT&T’s mobile phone service.

Comcast is throttling or slowing down traffic to sites that are competitive with its services. Deregulating Net Neutrality would also allow service providers to limit access to sites that disagree with their political or social agendas.

In California, legislation that would have kept Net Neutrality within the state was passed by the State Senate. But the State Assembly gutted the legislation and that gutted version of the bill was passed out of committee. The bill’s author called it a procedural move to keep negotiations open to restore protections in the bill.

“To be clear, if the bill ultimately remains in its current form, I will withdraw it, as I have no desire to pass a fake Net Neutrality bill,” Sen. Scott Wiener (D-San Francisco) said. “But my sincere hope is that we will be able to amend it in the near future back into a strong form.”

Again: see what happens when you don’t vote and make your voice heard?

For more on this topic, listen to our Podcast:Net Neutrality