The first race ever held was at Daytona Beach on a “beach road course”…that was in February of 1948. Road races were kept at a minimum and especially when TV got into the picture. A road course can be difficult and expensive to broadcast whereas a track is a contained unit where camera placement and angles are set in advance, and once set work for all the ensuing racing. During the late 40’s and early 50’s stock car racing was mainly confined to the Southeast. Charlotte and Daytona were premiere tracks then as they are today. But things changed radically in 1959.

The high-banked 2.5-mile Daytona International Speedway hosted the first Daytona 500. More than 41,000 fans were in attendance for the inaugural event in which the winner wasn’t decided until 61 hours after the checkered flag flew, as the result of a dramatic photo finish. Lee Petty was declared the winner by two feet after conclusive evidence from a newsreel is reviewed by Bill France Sr. ( In case you don’t know, Lee Petty is the father of the the “King”, Richard Petty.  Richard was to NASCAR what Arnold Palmer was to golf.) 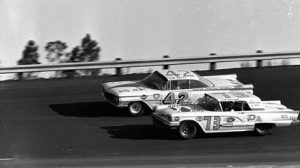